The Kanima's Master is revealed - now what is he actually up to? 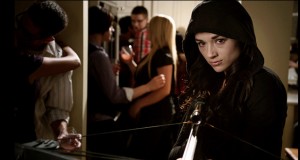 In some ways, it would be nice to have more two hour TEEN WOLF episodes, because then there wouldn’t be that inevitable delay of continuity. Then again, having to wait a week for resolutions is a good thing too – it makes you come back for more.

After last episode’s “Raving”, the gang start to get closer to who is the Kanima’s Master, and with “Party Guessed”, the real culprit is revealed.

While it was kind of obvious that Matt (Stephen Lunsford) was creepy and a little too interested in Allison (Crystal Reed), the series did a good job to throw suspicion off of him – until now.

Yes, Matt is the Kanima’s Master. Now that it’s out in the open, the next question becomes “why?” and “what exactly is he up to?”

With three episodes left in the season, it will be interesting to see how that gets resolved.

Meanwhile, “Party Guessed” has a really cool party sequence where the punch is seemingly laced with wolfsbane and starts to make everyone hallucinate – and in some ways confronting the things they don’t want to face.

It’s a good device to get more character development in an atypical manner. It’s also damned creepy at times – especially when it comes to Scott’s vision of Allison’s having wild sex with the Kanima.

Meanwhile, Stiles (Dylan O’Brien) and his dad (Linden Askby) start to work together in figuring out the case – even though he’s off the clock at the police department. And Allison’s dad (JR Bourne) kills Mrs. Argent (Eaddy Mays) because she’s been bitten by the wolf.

Allison finds out this information in another emotional scene, but I’m going to go on record that we haven’t seen the last of Mrs. Argent and that I suspect she’s still very much alive and now a lone wolf (or something of that nature) since we never saw the dead body.

TEEN WOLF continues to impress with its mix of horror, teen angst drama and weekly cliffhangers. It will be interesting to see how the series handles an order of 24 episodes next season. Clearly it will offer up a bigger canvas and as the show has proven – it’s got more than enough mythology and characters to keep the series engaging and thrilling.