Allison heads to the Dark Side, Jackson has a heart and Gerard is rising as a formidable villain 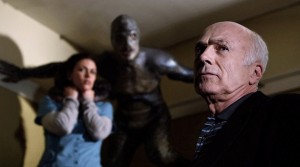 After a full season of one major event after another in a great, long story arc (and little room to breathe), “Battlefield” finally allows TEEN WOLF to put some space between the major Kanima storyline and last week’s death of Matt (Stephen Lunsford) who went pretty crazy after he bonded with the Kanima.

He wanted revenge, and the Kanima offered that. It wasn’t intentional, but it happened. Then Gerard (Michael Hogan) showed up, drowned Matt and then took control of the Kanima for his own purposes.

As “Battlefield” begins, we’re treated to a really strongly scripted (and expertly directed) sequence where Stiles (Dylan O’Brien) talks to the school counselor about everything that happened since last weekend. It’s the first major time jump the series has done all season.

We see Stiles is starting to feel like he’s helpless, unlike his more super-powered friends. It’s grating on him, but the school counselor quotes Winston Churchill and says, “when you’re going into hell, keep going.”

Major things happen this issue, but most of it surrounds the big championship lacrosse game. Gerard plans to kill someone that Scott (Tyler Posey) loves, unless he gives up Derek (Tyler Hoechlin). Meanwhile, the Hunters have set a trap for some of Derek’s pack. And Allison (Crystal Reed) has inherited her mother’s craziness. She’s lost her mind and has no interest in Scott anymore. She’s hunting wolves now and she wants them dead. It’s her father that stops her from the final kill this episode.

I love that Scott’s mom (Melissa Rossio) finally knows what’s going on with her boy. The first part of the episode where she’s terrified of him, to the final part where she wants him to protect everyone is well played.

Meanwhile, Peter Hale (Ian Bohen) warns Derek that something big is coming and he needs his help. And he will help him too – despite their differences (and the fact Derek killed him). He even clues Derek in on how to save Jackson (Colton Haynes).

At the end of the episode, Jackson tries to kill himself instead of someone else and Stiles disappears. It’s yet another great cliffhanger moment and it’s delivered with the same gusto the series has delivered all season.

It’s heart-breaking to see Allison lose herself as a Hunter, but change is important for shows like this – and it grows the mythology even further. We also learn that these werewolves also have the ability to heal and take the pain away from other animals (and I assume people too).

Season 2 is coming to a close and TEEN WOLF looks like it will be ending it again at the top of its game. A worthy successor to BUFFY THE VAMPIRE SLAYER, this is how you do genre shows. You treat them like big feature films, create great likable characters, have some fun humor, gore and terrifying chills and tell a fantastic story. Soon this series will be the benchmark for what all other high school horror shows will have to live up to. So let’s embrace the greatness of this show and cross our fingers the final episodes pay everything off with some big, major events that will have us waiting impatiently for Season Three.