Another average episode for a sitcom that should be much better 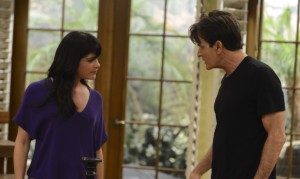 Several weeks in and ANGER MANAGEMENT is still struggling to find its voice and tone. There are sparks of potential here and there, but it’s a series that still has an identity crisis.

With “Charlie Dates Kate’s Patient” the premise is pretty much laid out in the title. Charlie (Charlie Sheen) has been sleeping with his long time booty call Kate (Selma Blair) for some time. Even after she started to be his therapist, they still found a loophole to allow them to have sex whenever with no strings attached.

Then jealousy sets in this episode when Kate starts to hang out with an older, “smarter” patient and Charlie inadvertently starts sleeping with one of Kate’s patients (Kristen Renton).

The results aren’t really all that comical and standard sitcom fluff, but it’s confused by the issue of what is Charlie and Kate’s relationship and is it real or is it convenience? It’s an interesting idea, but it doesn’t have any clever exploration, instead it’s silly “I need to hide my new girlfriend from Kate” moments.

Meanwhile, the most interesting part of the show is proving to be Charlie’s patients who are not getting nearly as much time as they should. When Charlie wants his patients to reach out to each other in an anger emergency instead of calling him, it results in some progress. Yet, we “hear” what the progress was, and don’t see it, which to me was the more interesting story that should have been explored this episode.

We also learn that Charlie cheated on his ex-wife Jennifer (Shawnee Smith) many times during their relationship, which actually makes Charlie an even less likable character before.

Frankly, I’m still fascinated by ANGER MANAGEMENT and I want to like it. I think Charlie Sheen is incredibly talented and I think ramping up a sitcom like this in no time is inevitably going to go through instant growing pains. And with the fast turnaround of episodes, particularly if it gets picked up for an additional 90, it could only mean that it’s only “up” from here … or perhaps more of the same. I’m hoping it’s not the latter, because if the show could work out the kinks, it could actually develop into a tolerable and funny sitcom.