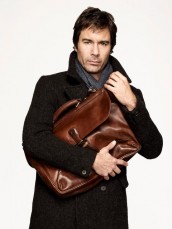 Eric McCormack is great and there’s a good show in here, but not with this first episode 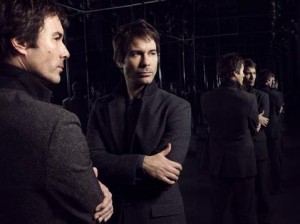 What is real and what is a hallucination? That’s the trick the new TNT drama series PERCEPTION tries pulling on viewers.

Think of it as A BEAUTIFUL MIND meets HOUSE as the brilliant, yet mentally unstable neuroscience expert  Dr. Daniel Pierce (Eric McCormack). He is asked by former student Kate Moretti (Rachael Leigh Cook) to assist involving a strange murder now that she’s working for the F.B.I.

As the episode twists and turns, we soon discover some of the people surrounding Pierce aren’t real, some of the people assisting him in solving the puzzle of the murder are not real and that everything Pierce experiences is on some higher level. He is a paranoid schizophrenic, of course.

The problem with PERCEPTION though is that it’s trying so hard to be clever, many of the incidents in the episode come off a bit hokey and silly at times. When we see who the murderer is, the scene plays like some SATURDAY NIGHT LIVE parody of a murder sequence from a typical crime drama show, not the serious moment it’s supposed to be.

The gimmick of who is real and who isn’t is also a bit frustrating as is all the additional people (real and figments of imagination) to solve the murder. This kind of concept almost needs a little more of a slow burn to make it more manageable and less goodball. If the audience is always going to be guessing what’s what, then it takes away some of the joy of enjoying the case of the week aspect of the show too.

That said, as much as I did not like this pilot at all, there seems to be many positives here too. The premise, if finessed some more could actually work. McCormack is great in the role and is the grounding center to the rediculousness that surrounds him. He carries the show, and manages to keep a very even tone throughout. The bond his character shares with Moretti is interesting, though it’s not refined enough to really see what direction that will take as the series progresses.

I did like his teaching assistant Max Lewicki (Arjay Smith) who helps Pierce determine the real people in his life from the fakes. That’s one of the more refreshing elements of the series.

Having a paranoid schizophrenic teach at a prestigious school is a bit odd too – and a leap of faith, but I’ll go with that one, fo rnow.

PERCEPTION still isn’t all there and it will need time to grow and hopefully find itself. This not being network TV, TNT will likely be patient as it does just that (heck, it took a full uneven season of FALLING SKIES to really hit it out of the park with Season 2). There is a good show in here, unfortunately, I wish I could have hallucinated someone else to watch the first episode for me instead (because maybe they would have liked it a whole lot more).