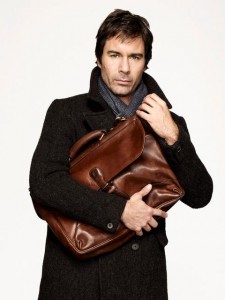 In TNT’s new series PERCEPTION, Mondays at 10 PM, Eric McCormack stars as Dr. Daniel Pierce, a brilliant neuroscientist and university professor. Daniel has just been re-approached by his former associate, FBI Special Agent Kate Moretti (Rachael Leigh Cook) to resume helping with federal murder investigations – even though Daniel suffers from a form of schizophrenia that causes him to see and hear people who aren’t really there.

The Toronto-born McCormack spent eight seasons on the half-hour comedy WILL & GRACE as Will Truman, the NYC lawyer who was the least neurotic of that series’ four main characters. More recently, McCormack starred in TNT’s advertising dramedy TRUST ME. Earlier this year, McCormack starred opposite James Earl Jones and Angela Lansbury in the Broadway revival of Gore Vidal’s political drama THE BEST MAN (the play is scheduled to run through September 9, but McCormack had to leave on July 8 in order to return to filming).

After a Television Critics Association event, McCormack takes time to answer a few more questions about his views on PERCEPTION.

ASSIGNMENT X: Were you involved in the creation of PERCEPTION, or did you come in once it had been created?

ERIC McCORMACK: No. I came on as a producer once they had the script, once [TNT vice-president of programming] Michael Wright came to me, and Ken [Biller, who created PERCEPTION with Mike Sussman] and I met and just hit it off. But no, I didn’t create the scripts at all.

AX: Were you actively looking for another series when PERCEPTION came along?

McCORMACK: I was, yeah. I loved TRUST ME, working with TNT on it. I was sad when we didn’t have the numbers to keep going, so I was kind of secretly hoping that if Michael Wright had something else, he’d come knock on my door, and that what happened a year later.

AX: Can you equate Daniel to any characters you’ve played before? Is he a cohesive character within his schizophrenia?

McCORMACK: It’s less the schizophrenia than it is him as an intellect, as a scientist. That’s new, I haven’t done that one. I generally play smart characters, but this guy is way smarter than me [laughs], and he is driven by that, the need to learn more, to know more and to share it and teach it. [He is] cursed by a disease that wants to keep him away from people, that gets in the way of sharing. So I’d say he’s very different for me than other [characters] I’ve played.

AX: Do you play that drive from the inside out, where you find that within yourself, or do you think, “What would be the manifestations of this?” and then psych yourself into those?

McCORMACK: It’s a little of both. With something like this, most people don’t know. When they hear the term “schizophrenia,” they don’t know the manifestations of it. It’s a scary term. As an actor, you can make some very shallow choices [if not careful]. So I was careful to make sure I did enough research on the outside [about] the physical manifestations, enough to make sure it was always coming from a place of [authenticity]. When you’re an actor, you spend a lot of time imagining things, and you get to the point where you go, “We’re going to have to turn this into a profession or we’re going to be talking to ourselves in the street.” So I certainly understand the idea that I can look across the room and see someone [who isn’t there] who, as far as I’m concerned, is there. So that was more of an inside-out sort of thing.

AX: So do you think there’s an element of schizophrenia in all good actors?

McCORMACK: I certainly think that there is an element that understands – that has an empathy for what that must be like. Certainly none of us can fully understand how hard it is to be mentally ill.

AX: And with Kelly Rowan’s character Natalie, who appears to and interacts with Daniel but isn’t really there, does he understand on any level that she’s not real?

McCORMACK: He does know. It’s revealed later on in the first season who she is, why she is, but he is aware.

AX: Had you done any work with green screen in other projects, in terms of imagining something that isn’t there?

McCORMACK: I haven’t done a whole lot of that, but I referenced it earlier to somebody that that’s what it’s like. We shoot a scene that’s Kelly and I, and then we’ll shoot the same scene again without her there and just shoot my half of it. And I guess that is what it’s like to play that. It’s one thing to be acting with another actor and for the audience, they’ll know she’s not real. But for me to really act with no one there is to remind me what these people [who are schizophrenic] go through, that for them, they’re really talking to the air.

AX: And just one WILL AND GRACE question – how did you feel about the way it ended?

McCORMACK: I was delighted with the way it ended. I loved that series finale.

McCORMACK: I would like to say that it’s not what you think, that it’s unique. It’s not a procedural, it’s something else altogether. There’s a lot of wonderful character stuff, a lot of surprises along the way and it’s going to be exciting.