The actress talks playing an FBI agent on the TNT series 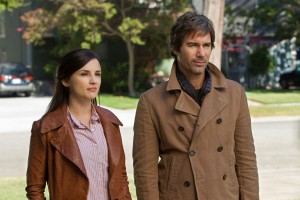 In PERCEPTION, TNT’s freshman series airing Monday nights at 10 PM, Eric McCormack plays college professor Daniel Pierce, who is a high-functioning schizophrenic. Rachael Leigh Cook plays Kate Moretti, one of Daniel’s former students who has become an FBI special agent. Kate enlists Daniel’s help in solving crimes; she’s aware that he has psychological problems, but not how extensive the issues are.

Cook, who hails from Minnesota, has been acting almost all her life. In 1995, she started her film career in the feature version of THE BABY-SITTERS CLUB and as Becky Thatcher in a new adaptation of TOM SAWYER. More recently, she’s starred in some romantic comedies, including SHE’S ALL THAT, had a recurring role on PSYCH, voiced Jaesa Williams in the videogame STAR WARS: THE OLD REPUBLIC and spoken for all sorts of characters in multiple episodes of ROBOT CHICKEN. However, Kate is Cook’s first long-term stint playing a character with a badge and a gun.

ASSIGNMENT X: How did you become involved with PERCEPTION?

RACHAEL LEIGH COOK: I auditioned for it and I was so scared and I really felt like I had no idea how to do the procedural stuff. I thought you had to have a sort of bluster to your swagger for law enforcement or something, and I really didn’t think I was going to get it, to be honest. I was beyond thrilled. I don’t even remember what happened [at the audition]. I was so out of my mind scared. I mean, we all walk through this life, knowing or fearing that people might be judging you, but when you walk into an audition – that’s why you go there, is to be judged. Which is terrifying. I really wanted to play this character, to play someone who is firmly in the adult world, so this was an amazing opportunity for me.

AX: You started your film career when you were about fifteen years old, so obviously you began by playing younger characters. Were you looking to play somebody who had a job, period, or a job where the character is actually sort of in charge of other people?

COOK: I definitely was drawn to this from a character standpoint, because she’s very strong and very brave and very much an adult. Though I’ve been playing an adult for some time now, this is her being in the work force and very responsible, that’s definitely an attraction.

AX: You’ve done a number of romantic comedy feature films. Does Kate feel more nuanced as a character than some of the people you’ve played in the big-screen comedies?

COOK: Well, no. There’s definitely nuance [in PERCEPTION], but I think that comedy is actually pretty nuanced. You have to try to dance around with that language and I find it to be incredibly fun, but it’s also a hell of a lot harder to get right. My job in this show, and every actor’s job [in every project], but especially in this show, is to serve the story, tell the story, get the audience through it, make sense of things, be the audience’s perspective. So it’s just two totally different experiences and we have some scenes in this show that have felt almost like I’m doing a romantic comedy at times, which is fun. That feels like home, and I’ve got to be careful not to get comfortable there.

AX: How is the pace of production on PERCEPTION compared to features?

COOK: It’s so fast. It is so fast. Particularly the crew we had, they worked incredibly quickly. Doesn’t matter if the camera crew is lighting a football or a football field, it was all done within fifteen/twenty minutes of starting set-up, so we were just always working. We’d crank out seven/eight pages a day, sometimes more, which is a lot. The memorization was really hard. The pace is really difficult. It took me a couple weeks to sort of catch my breath and really try to deal with the hours of it.

AX: There’s a shot where Kate takes a huge jump off a building. Are we seeing you or your stunt double on the descender wire?

COOK: You know, I went up to the second story, and I had a wire on my back, and [down below] a big bag I was supposed to jump onto, and I got pretty scared [laughs], and I thought to myself back to all the times that you’re at the mall or something and you think, “I hope I don’t jump over this third-story railing.” It’s not an urge. People say, “You’re not afraid of heights, you’re afraid you’ll jump” or something like that, like, “You’re afraid of your own free will.” I got up there – that was all gone. Because I did not want to do any jumping off of that building. So long story short, I cried a little and I finally jumped and I blacked out in mid-air because I was so afraid [laughs]. I woke up just hitting the pad. So they couldn’t use my fall, because I think it might be too hilarious.

AX: Will that be on the blooper reel on the home video release?

AX: So your character will be keeping both feet on the ground after that?

COOK: Definitely not, but probably not anything on that scale again. Now I really think I could do it, though. By the end of the day, it got fun.

COOK: That [high-jumping] stuff is expensive, so we have more gun stunts and chases and taking down big guys one way or another. I think they find it hilarious to find me the largest criminals around [laughs]. They didn’t have one bad guy under six foot.

AX: How is that as a framing issue?

COOK: I think that they just [work it out] right in the lens, just get me in the frame somehow. I think the writers think it’s funny.

AX: Did you do any gun training to play an FBI agent?

COOK: I already knew how to shoot, actually. I had a membership to a gun club for about two years. It’s expired. I did a police ride-along, which was a lot of fun. Did you know that anyone can do this? You can just roll up to your local sheriff’s office and say, “Hi, I pay taxes and I want to see what you’re doing.” [laughs] And they have to take you along in the car. It’s great. You should totally do that.

AX: Did you do any other research into FBI agents?

COOK: Oh, yeah. I read some FBI field guides, career guides, that kind of thing, just to understand what [an agent’s] day to day might be like, which was not incredibly helpful in terms of playing the character. It’s some pretty dry reading, if I do say, but there are some really exciting books by FBI agents about their careers that were really fun to read. THE LAST UNDERCOVER by Bob Hamer is pretty cool.

AX: What would you say Kate’s attitude is toward Daniel? Does she think, “I know he can do his job, so it’s okay if he’s a little weird,” or does his weirdness ever worry her?

COOK: I think it’s got to definitely worry her, but I think it’s interesting. What I think is very sweet is that the character of Daniel really takes care not to let Kate see him be truly unstable or crazy, quote-unquote. So she doesn’t see the really rough stuff that he goes through. I think that she understands that he’s mentally ill, but is able to view it more as quirks for the most part.

AX: Had you been aware of Eric McCormack before working with him on this?

COOK: Yeah, totally. He’s Will Truman [on WILL & GRACE]. I don’t want to put him in a box like that – I have seen him in other projects as well, he’s wonderful, but that’s my favorite role of his that I had seen so far. Until this one, of course. He’s very naturally funny, so that probably was the most difficult thing, for both of us, just trying to flip it into a comedy sometimes.

COOK: My husband Daniel Gillies [of THE VAMPIRE DIARIES] just finished a film that we made together that will hopefully continue to make the festival circuit, called BROKEN KINGDOM, and we’re very, very proud of it.  We’re both in it, and he wrote and directed it.

AX: And anything else you’d like to say about PERCEPTION?

COOK: I’m not good at asking for things. It’s something that’s always been hard for me, so I don’t like saying this, but I really want to implore everyone to check out the show. I just think it’s a really special project and it would mean a lot.