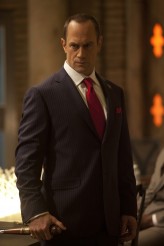 All of the plots are engaging, though it’s hard to see how they can come together

TRUE BLOOD seems to be even more divided than usual in the episode “Authority Always Wins.” This isn’t a bad thing – pretty much everything going on is intriguing and most of it is entertaining – but it’s a little like trying to watch a dozen different shows at once.

The previous episode ended with the newly-vamped Tara (Rutina Wesley) zipping out of her grave and going for Sookie’s (Anna Paquin) throat.Tara’s maker Pam (Kristen Bauer Von Straten) takes the time to tell her new progeny not to eat Sookie or Lafayette (Nelsan Ellis). However, Pam has never been a font of maternal sentiment and siring Tara doesn’t change this.  Sookie and Lafayette manage to get the feral Tarato safety for her daytime sleep. Sookie then has to dissuade Lafayette from staking his cousin. When Tara wakes, she announces she’ll never forgive either of them, then takes off into the night.

Back at the nightclub Fangtasia, Pam discovers her maker and business partner Eric (Alexander Skarsgard) is still absent. Pam flashes back to her human days in 1905San Francisco, when she was a madam and her workers were being killed by a knife-wielding human psycho. Eric rescued Pam from attack on the street; he was charmed by her lack of alarm at his killing of her attacker.

In the present, Pam thinks Eric is staying away because he’s angry at her for endangering Sookie (last season for us, but only a few days ago for the characters). In fact, Eric, along with Bill Compton (Stephen Moyer) and Eric’s vampire sister Nora (Lucy Griffiths) are all prisoners of the Vampire Authority. All three are tortured and questioned; additionally, all are lied to about what is happening with the others. We learn from Bill’s interrogator Dieter (Christopher Heyerdahl) that the vampire bible predates both Old and New Testaments, and says that Adam and Eve were created as food for the first vampire, Lilith. Vampire fundamentalists, called Sanguinistas, believe in a literal interpretation of the text and are against the human/vampire détente that the Authority is anxious to preserve.

Bill and Eric are finally presented to the Authority Council, headed up by Roman (Christopher Meloni). The Council is divided on whether or not the duo should be staked for killing Nan Flanagan (the Authority seems unaware that Nan was fomenting rebellion). Then Bill brings up Russell Edgington (Denis O’Hare), the vampire who killed a human newscaster mid-broadcast. Russell is alive and very likely coming for Bill and Eric – they are the Authority’s best chance of catching Russell. Russell, as we see at the episode’s end, is recuperating from last season’s sun-scorching in a lair littered with corpses and human body parts.

Since the local werewolf pack now knows that Alcide (Joe Manganiello) killed their packmaster Marcus, the wolves expect Alcide to take over. Alcide has no interest in doing this. Shapeshifter Luna (Janine Gavankar) brings home her tortured boyfriend and fellow shapeshifter Sam (Sam Trammell). Marcus’ mother Martha (Dale Dickey), shows up at the door, begging to see her granddaughter Emma – Luna and Marcus’ little girl – but Luna refuses and throws Martha out. Luna becomes angry when Sam suggests that there’s the possibility that Emma might take after her father and be a werewolf rather than a shapeshifter. Luna makes Sam leave – and then finds that Emma has turned into an adorable wolf pup.

Sookie’s brother Jason (Ryan Kwanten) and sheriff Andy Bellefleur (Chris Bauer) find the abandoned care of Debbie Pelt, Alcide’s ex-girlfriend. Jason and Andy of course don’t know that Sookie shot and killed Debbie. Andy, a former V addict, finds vials of the drug in Debbie’s car. We can see he’s tempted, but he shows the drugs to Jason and dumps them out.

Jason denies it, but he’s still clearly feeling blue about the refusal of vampire Jessica (Deborah Ann Woll) to be serious with him. However, Jessica is outraged when newly-vamped Steve Newlin (Michael McMillian) thinks he can buy Jason from her. Newlin, formerly the head of a huge anti-gay ministry, is now giving TV interviews about being a Christian vampire (though he doesn’t publicly acknowledge that he’s gay, much less crazy about Jason).

Terry Bellefleur (Todd Lowe) is now walking in his sleep and having violent episodes with his increasingly worried wife Arlene (Carrie Preston). Arlene finally goes to see Terry’s old Army comrade Patrick (Scott Foley), hoping he can tell her what’s wrong. She suspects it has something to do with an incident that happened in combat. Terry shows up, wanting to talk to Patrick in private about a mutual war comrade who had a habit of starting fires and who is still alive.

The great thing about “Authority Always Wins” is that just about all of the plotlines have moments of astonishment. The material with the Authority is consistently engrossing, with Heyerdahl (late of Syfy’s SANCTUARY) oddly likable as Bill’s interrogator and Meloni making an immediate striking impression as the badass Roman, barking CEO one instant and reverent worshiper the next.

For fans of the budding bromance between Bill and Eric, it’s fun to see the two of them standing up for one another and their different but equally entertaining styles of holding on to their dignity in extremis.

The tension between Alcide and the wolf pack has a strong dynamic and Manganiello makes Alcide’s exasperation an almost primal affair. Dickey is quietly affecting as Martha, who starts out very unsympathetic but winds up touching with her quiet need to see her one living relation.

Woll and McMillian have established a hilarious adversarial chemistry that makes us want to see more of their two vamps clashing.

Ellis is outright heartbreaking as the distraught Lafayette, with Paquin doing a fine job of showing us that Sookie is keeping herself together out of sheer necessity.

The whole season seems to be heading in an intriguing direction, with a clash of vampire fundamentalists vs. moderates and Bill and Eric (and, who knows, maybe eventually Tara and Pam) caught up in the middle containing some real-world colors without needing to slam the parallels too hard. The werewolf situation feels a little more contained, but with Alcide, Luna, Sam and that charismatic puppy, we’re interested in all the players.

As for what comes next, let’s just hope it contains at least one scene between Authority leader Roman and crazy King Russell. Meanwhile, what we’ve got now is plenty lively.