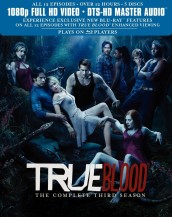 TRUE BLOOD took a break from the weird cult rituals and strange otherworldly characters from Season Two and went back to doing what it does best in the third season – focus on vampire mythology and the interesting (and oft strained) relationship between Sookie (Anna Paquin) and Bill (Stephen Moyer).

The main crux of the third season had to do with a vampire “king” living in Mississippi and feeding a pack of werewolves vampire blood in order to up their ferocious nature. Of course, even among the werewolves we find that some are on the good side while others are definitely bad.

Unlike Season Two, which had two distinct plotlines (one involving the God squad hunting vamps and the other involving Maryann), Season Three focused nearly exclusively on the whole aspect of Bill migrating to Mississippi and fighting this king of the land in order to save himself and Sookie (who naturally gets wrapped up in it as well).

Yeah, there were all sorts of random subplots such as Sookie being a fairy or some stupid sh** that we will probably get more of in Season Four. But for the most part we got a pretty good storyline about these clashing vampires as well as Erik Northman’s hatred of the vamp because he killed his parents centuries ago.

One of the more interesting subplots that will continue to play a role (I assume) in Season Four is the love triangle between Eric, Bill and Sookie. This heated up toward the end of the season with Bill taking his revenge on Erik by incasing him in cement. Oh it also has one of the most messed up sex scenes in maybe the history of cinema between Bill and his maker, Lorena.

The other thing that I enjoyed about Season Three was the development of Sam (Sam Trammell) and that we didn’t know a lot about him at all from the first two seasons and he had been basically playing a role. He has a lot more to him and has done quite a bit of nefarious deeds during his time as a shapeshifter. Of course, we also get the stupidity of Jason Stackhouse (Ryan Kwanten) and his multiple dramas involving the police and his own hang ups with women that have him pursuing and helping a female werewolf.

Going into Season Four, we have a lot of interesting things happening with the love triangle, the changing face of Sam, the continual annoyance that is Tara (Rutina Wesley) and the on again/off again relationship with über hot Jessica (Deborah Ann Woll) and Hoyt. Now as long as they don’t mess it all up with all this fairy nonsense and Sookie we should be in for a good time.