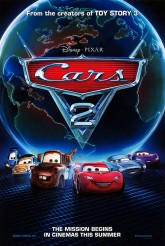 For those who either really liked the first Disney/Pixar CARS, or pretty much liked it but wished it had a genre plot, here is CARS 2. It brings back not only the CGI animated automotive universe of the first film (sans people or animals), but also the main characters, the learn-important-life-lessons through-line and even a return to the racetrack. Where CARS 2 veers off from its predecessor is that it’s a spoof of Bond, James Bond spy movies, with fast cars, beautiful girls (who are fast cars), disguises (as slow cars) and … you get the picture.

Although the star of the original CARS, racer Lightning McQueen (Owen Wilson), is back, CARS 2 settles on his Radiator Springs buddy Tow Mater (Larry the Cable Guy). When Lightning is invited to join a multi-country series of races sponsored by eco-fuel mogul Miles Axlerod (Eddie Izzard) to promote his alternative to gasoline, Mater comes along as part of Lightning’s crew. However, things get turned upside-down when Mater is mistaken for an American espionage agent by veteran British spy Finn McMissile (Michael Caine) and Finn’s plucky new apprentice, Holly Shiftwell (Emily Mortimer). McMissile and Shiftwell, thinking they’re dealing with a master of disguise who is going incognito as an especially dumb tow truck, bring Mater into their investigation of a ring of evil saboteurs.

It is to the credit of CARS 2 that most people’s first thoughts will be about how utterly cool it is to have Caine playing a master of espionage at the peak of his game, who also happens to be a British sports car. The interplay between the animation and Caine’s cool, determined voice is a joy.

It’s also nice to see that, in best Pixar fashion, the screenplay by Ben Queen, from a story by director John Lasseter, co-director Brad Lewis and Dan Fogelman, CARS 2 maintains continuity with the original CARS. There is a sweet tribute to Paul Newman’s character Doc Hudson, Lightning is still with his sweetheart Sally (Bonnie Hunt) and is still a better person/car following the self-improvement he underwent in the first movie, and so on.

This leads to a rather curious situation – because the filmmakers apparently feel Lightning has absorbed most of the big ephiphanies he needs (except for the one he gets here), the spotlight is instead transferred to Mater. Larry the Cable Guy does a perfectly good job of voicing the upbeat if dense character, but the film seems a little confused about why it is that Mater has a problem. Both Lightning and Mater believe that the issue is Mater’s lack of sophistication. This, however, isn’t Mater’s problem. Mater’s problem is that he’s actually unobservant and inconsiderate – he never waits to see what anybody else is doing or listens to what they’re saying before he rushes in and offers an unsolicited opinion or takes an unwarranted action. When Lightning decides that it’s just great for Mater to “be himself” and encourages Mater in this, the movie seems to be taking the position that it’s just great to run in and demand attention, no matter what else is happening. There’s a fine line between being healthily assertive in joining the conversation and being rude, however unintentionally. Mater is on the wrong side of that line, which gives CARS 2 a bit of a strange message.

There’s also the fact that placing Mater front and center is a little like centering a whole movie on the vehicular equivalent of Don Knotts. Running jokes that would be fine in a short feel somewhat stretched out here, especially as the film runs 113 minutes.

On the other hand, CARS 2 does have a lot of good gags, plus some fabulous voice talent – really, where else is Vanessa Redgrave going to voice the Queen of England as a car wearing a tiara? The 3D works fine, though it feels unnecessary.

Playing with CARS 2 is the TOY STORY short “Hawaiian Vacation,” wherein all the main characters – voiced by Tom Hanks, Tim Allen and the rest of the film cast – have to get creative when two of them fail to get where they’re going. It is as funny and charming as any segment in the films, continuing on the closing-credits riff in TOY STORY 3.