An unispired ending to a really strong season 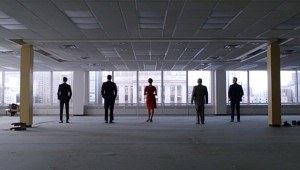 It’s funny. I thought following on the heels of last week’s episode of MAD MEN, that there would be a HUGE finale that would leave fans reeling, but honestly it felt more like a normal episode with not a lot of huge revelations taking place.

“The Phantom” just seems like it follows in the wake of so much this season, that there isn’t really anything it can do to shock or surprise. Don (John Hamm) has a toothache for most of the episode, so as with any MAD MEN scenario of course he’s going to see dead people. More specifically, Don has a few close encounters with his half-brother Adam (Jay Paulson) who hung himself way back several seasons ago. I think it’s obvious that Lane’s (Jared Harris) suicide is causing Don a lot of guilt and some depression so he’s thinking of the last person that he knew who took that particular road out of this life. Of course, this also leads Don to examine home truths about himself and his behavior towards others in his life, and to give Megan (Jessica Pare) a shot at acting in a commercial.

Pretty much the bulk of the time leading up to her getting the part in the commercial, Megan spends the episode wallowing in self pity and drinking away her sorrows. She even shivs one of her acting friends in the back to get the part. There is no loyalty among thieves.

All of Megan’s theatrics leave the door wide open for her mother, Marie (Julia Ormond) to cat out on the town with Roger (John Slattery). Will this relationship go anywhere? Who can say, but Roger ends the season buck nekkid in front of a window overlooking the city at night.

Pete (Vincent Kartheiser) ends up hooking up with Beth Dawes (Alexis Bledel) again, so she can remember him for one more day the way he is, before she gets electroshock therapy and forgets their entire affair. This is actually one of the more touching episodes for Pete Campbell. His visit with Beth in the hospital is a side of him we never see, and he even takes on her husband on the train in her defense. Of course, seeing him get socked by the conductor brought some joy, since I still am not fond of the character, but he might be growing in new and unexpected ways.

The season ends, taking a note from THE SOPRANOS, and leaves us guessing as to what Don is going to say when propositioned by two loose ladies at the bar. The screen goes black and we won’t know until next season whether or not he’ll be up to his old deplorable tricks. Boo.

Peggy (Elizabeth Moss) came back for a few scenes in this episode and besides getting a nice wardrobe upgrade, she and Don seem to be back on better footing in their feelings towards one another.

Big Betty Francis (January Jones) didn’t breach the surface for air this time, and I wonder who she ticked off? She got slapped into a padded body suit and prosthetics for the whole season, and she was barely on the show except for one episode. I guess as Don moves on … so do we.

So that’s it for another smoke filled, booze soaked season of MAD MEN. It has had some really interesting ups and downs, but in the end it just kind of ended with more of a whimper than a bang.