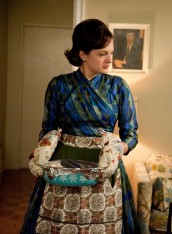 “At the Codfish Ball” has some lovely moments for MAD MEN. Post last episode’s huge Don (John Hamm) and Megan (Jessica Pare) drama it is nice to see the two working as a couple both in the home and in the workplace. The simple fact that Megan’s idea is the one that saves the Heinz account now places her in a higher bracket of character contribution in the office. She is no longer just Don’s former secretary and wife; instead she is now a valid part of the team with invaluable input just like the rest of the ad folks.

The casting of Julia Ormond and Ronald Guttman is absolutely perfect, and the exchanges between the two in this episode are priceless. I am extremely curious as to what dreams Megan gave up according to her father, but I guess that is a subplot for another day. Plus Roger (John Slattery) getting frisky with Megan’s mom was something that was in the cards from the moment she tied his tie, but was a lot less classy that I was expecting. Still….it is MAD MEN….it’s not always classy….and sometimes we love it because it’s tawdry.

Once again this episode Roger got a LOT of priceless lines, most of them directed at Sally (Kiernan Shipka) during the dinner. I don’t really remember seeing the two of them interact before like this and it was really interesting to see.

Speaking of Sally, I thought her look for the dinner was very Barbarella! The outfit and the white go-go’s really were quite mod, and I was sad that Don had to be a prude and make her take them off. Sally so rarely gets to dress older and she often is still stuck in little kids clothes.

And I love Peggy (Elisabeth Moss), but why did she think that he staunch Catholic mother would be OK with her shaking up with a man in NY without a marriage license? Her mother has been understanding about a lot of things, but the more Peggy pushes the envelope, the more she’s going to come down on her like a ton of bricks. I’m just pleased to see Peggy have a guy in her life that challenges her and gives her something else to define her life by other than just her advertising job. Peggy is so driven, she needs to learn to have fun and have more of a life outside of work.

Lastly, what’s up with creepy Glen (Marten Holden Wiener) returning here and there? I keep waiting for them to show him in some kind of institution for the criminally insane, making Popsicle dolls of Sally and her family and their home. There is something about the flatness of his voice that screams Norman Bates. And I really could have done without the lack of clothes he was wearing (or almost wearing) for the final scene of the episode. Isn’t he a little young to be show that much skin? NAMBLA Alert!