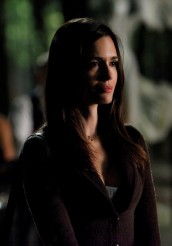 TV Review: THE VAMPIRE DIARIES – Season 3 – “Do Not Go Gentle”

Finally something interesting happens to Alaric!

The most important thing about THE VAMPIRE DIARIES episode “Do not go Gentle” is the fact that they are finally doing something with Alaric (Matthew Davis) that is worthwhile! For the better part of this season I have been railing on the fact that the writers just can’t seem to make up their minds in regards to what to do with Alaric. He gets smacked around, killed and brought back with his ring, and most recently that same ring has been making him a sociopathic killer. Now, Alaric is going to be an original vampire with a stake that can kill any original. This looks like a plot twist worth tuning in to see.

I pretty much figured the big finale moment would be someone walking back to the crypt and feeding Alaric blood so that he would complete his transformation and become a vamp. All of the teary-eyed farewells and moments with characters breaking down about the loss of Alaric just seemed a bit trite to me. I knew he wasn’t going to be dead for good; the plot of him being an original vampire and a hunter is just too juicy to not do.

Jeremy (Steven R. McQueen) has been back one episode and is already up to his season one whiny kid brother antics. That character has grown so much since the first season, but it seems that the writers couldn’t come up with a whole lot for him to do this time other than throw a tantrum about Damon (Ian Somerhalder) wanting to mercy kill Alaric. Jeremy does get some quality time with a crossbow, but other than some strong sexual undertones between him and Matt (Zach Roerig), his reappearance on the series seems to be there just to annoy the viewing audience.

Speaking of Matt, anyone else think the Caroline (Candice Accola) intervention was a bit harsh and out of place? The fact that Caroline felt she needed to point out to Matt that Elena (Nina Dobrev) was taken a couple of times over, and he should back off because she is destined to be with a vampire seemed a bit too bitchy for the character. I like Caroline with a touch of Cordelia, but she doesn’t have to go full blown hater.

While on the subject of Elena’s gal pals, is Bonnie (Kat Graham) finally going to get some kind of happy ending? Or is that even possible as long as she’s friends with Elena? It always seems like everyone around Elena gets punished for trying to defend her, and for once it would be nice to see Bonnie actually have some kind of relationship that doesn’t end in death or involve ghosts, or vampire mind wipes.

Even though Elena was clearly thinking romantic thoughts about Damon last episode, all it takes is Stefan (Paul Wesley) to show up and be pretty and nice and now they seem to be back on. I know the series is created around this love triangle, but this is one storyline that I’m getting tired of spending a whole lot of time on. Pick one, pick both and really cut loose, but let’s make a deal here kids and move on so everyone can move forward with their lives.