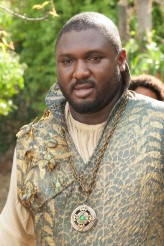 TV Review: GAME OF THRONES – Season 2 – “The Ghost of Harrenhal”

Eventful and emotional, as new alliances are forged and murders are carried out

The plot, along with various armies, is on the move in the GAME OF THRONES episode “The Ghost of Harrenhal.” We have two murders, a promotion, Tyrion (Peter Dinklage) scrambling like mad to prevent his sister Cersei (Lena Headey) and nephew King Joffrey from embarking on a path that will destroy King’s Landing and several scenes that are unexpectedly affecting.

Catelyn Stark (Michelle Fairley) and Lord Renly Baratheon (Gethin Anthony) pledge loyalty to one another, with the understanding that if Renly takes the Iron Throne, Catelyn’s son Robb will indeed be allowed to be King in the North. Alas, this is not to be, as Melisandre’s shadow monster appears in the tent and stabs Renly to death. Renly’s loyal knight Lady Brienne (Gwendoline Christie) is devastated. When soldiers run in, thinking Catelyn and/or Brienne have killed Renly, Brienne ably slaughters the lot. Catelyn convinces Brienne to leave with her – Brienne can’t avenge Renly’s death if she’s dead herself. Later, the women agree they saw a shadow in the shape of a man; Brienne specifically thinks the shape was that of Renly’s brother Stannis (Stephen Dillane). Brienne pledges loyalty to Catelyn, with the understanding that Catelyn will let Brienne do her best to kill Stannis when the time comes.

For that matter, Stannis’ loyal aide Davos Seaworth (Liam Cunningham) is very uneasy about Lady Melisandre (Carice Van Houten) after seeing her birth the smoke monster. Davos advises Stannis that his men resent Melisandre and may rebel if they think Stannis is carrying out her wishes as they sail on King’s Landing.

Baelish (Aiden Gillen), who has been at Renly’s camp to negotiate with Catelyn, knows he must leave immediately. He offers assistance to Renly’s widow Margaery (Natalie Dormer) and her brother Loras (Finn Jones), who was also Renly’s lover. Loras (like Brienne) wants vengeance on Stannis, but Baelish counsels patience. When Baelish asks Margaery what she wants, it’s not to be a queen – it is to be the queen.

In King’s Landing, Tyrion gets nowhere trying to persuade Cersei that Joffrey’s plans are likely to wind up with the capital falling to siege. Tyrion is further dismayed to find that the common folk think he’s to blame for the actions of the sadistic Joffrey. Acting on intelligence from his blackmailed cousin (and Queen Cersei’s lover) Lancel, Tyrion finds that the pyromancer – the magician who specializes in fire – has a great stockpile of flame that Joffrey has ordered thrown at Stannis when the attack comes. Tyrion commandeers the stockpile for his own purposes.

Theon Greyjoy (Alfie Allen) is given a sullen crew and an unpromising assignment by his father, who is intent on invading the North while Robb Stark is fighting in the South. Finally, a reasonable-seeming Iron Islander suggests he take a different boat, a different crew and a different task. Theon cheers up and decides to invade a town near Winterfell, which will leave that stronghold undefended.

Young Bran Stark (Isaac Hempstead-Wright), Lord of Winterfell in the absence of his mother and older brother, hears of the trouble in the nearby town and of course sends men to help defend House Stark’s banner men. Bran asks his Wildling servant Osha (Natalia Tena) what it means that he has dreamed about a crow with three eyes and of the sea flooding Winterfell, drowning many there. Osha doesn’t want to answer.

North of the Wall, Jon Snow (Kit Harington) is promoted to Ranger so that he can accompany a small group to go on ahead. His friend Samwell (John Bradley) takes over as the Lord Commander’s (James Cosmo) steward.

In Qarth, Daenerys’ dragons are eating and growing. Daenerys is popular in the town. Xaro Xhoan Daxos (Nonzo Anozie), one of the Thirteen who rule here, wishes to make a marriage of alliance with Daenerys. She wants the Iron Throne – he can buy her the ships and armies to capture it. He tells her that her advisor Jorah Marmont (Iain Glen) is in love with her. When Daenerys asks Jorah about whether she should marry, she can tell from his reply that he is indeed in love with her. Jorah says, passionately, that he wants Daenerys on the Iron Throne because he believes she will actually be a good and kind ruler. He tells her that if she accepts money from Qarth, the Qarth leaders will own her. Jorah says she will only need one ship and a good captain, and he will find those for her. Daenerys accepts.

At Harrenhal, Arya (Maisie Williams) is in the chamber listening to Tywin Lannister (Charles Dance) and his kinsmen discussing how to best beat her brother Robb on the battlefield. When questioned, Arya admits to being from the North, though not that she is a Stark. Arya is surprised to be greeted by Jaqen H’ghar (Tom Wlaschhar), one of the three men she saved by giving them the means to escape their cage when it caught fire. Jaqen says his god dictates that he owes Arya three deaths in exchange for those lives – he’ll kill three people she names. Arya selects the town torturer (who almost killed her friend Gendry) and sure enough, the torturer is found with a broken neck.

This is a TARDIS of an episode, with more crammed into it – coherently and effectively – than its timeframe indicates it could possibly hold. There are telling moments everywhere. Christie makes Brienne’s anguish over her lord’s death so palpable that we mourn Renly, and when she and Catelyn come to an understanding of mutual appreciation and admiration, it’s one of those magical moments where the kind of thing we’ve seen many times coalesces into an interaction that is specific, unique and stirring.

Williams as Arya has a wonderful bit of deadpan veiled defiance with her immediate benefactor Tywin Lannister.

The scenes with Daenerys are intriguing, and Clarke does a beautiful job of registering a complicated, wordless series of reactions as the character registers that her protector Jorah really is in love with her.

Every storyline hear has momentum and suspense, but the best thing about GAME OF THRONES – and “The Ghost of Harrenhal” is a fine example – is that we don’t just want to know what comes next, we are happy to be where we are, watching it play out as it does.