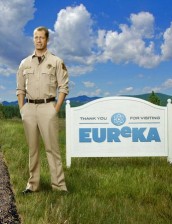 They found the ship - now they have to find the crew

When last we left EUREKA, the ground crew had found where the doomed Astraeus had gone, but was too late to rescue the ship’s crew, being kept in a virtual trance by the evil Beverly Barlow (Debrah Farantino) under the command of Senator Wen (Ming Na). And Jack (Colin Ferguson) had just figured out that Wen was behind the removal. In “Force Quit,” the key is to find out where everyone is, and thank heavens the producers aren’t going to drag the kidnapping story line out.

We start with Jack and Jo (Erica Cerra) beginning to suspect Beverly, when lo and behold, who comes sashaying into the Sheriff’s office, but Beverly, herself. She declares that Wen has gone too far and she’s the only one who can help find the crew and release them from their computer-induced trance without killing them. Given how much trouble Beverly has caused in the past, not to mention kidnapping the Astraeus crew, you kinda get that folks aren’t too ready to trust her.

Problem is, they don’t have much choice. Back in the bad guys’ lair, which is now in a shipping container on a ocean-going freighter, they’re noting that the crew is beginning to wonder what’s going on and step up surveillance on Zane (Niall Matter), in particular, since he’s the one most likely to figure it all out. And Fargo (Neil Grayston) is ranting that Holly dumped him via memo – apparently, the kidnappers don’t want him to know she’s dead.

Back in the real world, Henry (Joe Morton) very reluctantly agrees to work with Beverly, who logs into the system under Wen’s passcode. She sets up a screen so that the bad guys can’t monitor the Astraeus crew, then sets up a similar trance injecting Jack into that virtual world, replacing his Non-Playing Character. But Jack gets injected into the scene right when Zane is getting ready to attack the virtual Jack in order to get him to tell him what’s really going on. As if being told seconds before being put under that it’s four years later and he’s living with Jo isn’t enough shock. Needless to say, Allison (Salli Richardson-Whitfield) isn’t exactly thrilled to see him until he kisses her to make her believe.

But Jack gets enough of the crew together to get the parts he needs to blow up the virtual Astraeus, which should send up a flare to the real world about where the system and crew are located. You know he does, but the bad guys figure out that Wen really isn’t logged into the system and Wen figures out that Beverly must be helping from the outside.

Worse yet, as Jack notes, they’ve really broken the Matrix. The virtual world is literally falling apart around them. Zane gets Allison to electro-shock him, which wakes him up and he’s able to get into the system and shut it down and wake everyone safely. Except Jack – who does get pulled out at the last second by Beverly, who then gets out while Henry and Wen’s army goons are knocked unconscious by some sort of sonic grenade.

Jo gets a copter and some GD goons of her own and they go crashing into the system where the Astraeus crew is and all are brought home safely. Almost. Fargo wants to rescue Holly and Jo has to tell him that she’s already dead. So while everyone is happily back in Eureka, Fargo’s pretty messed up.

And I’m crying. Who’da thunk you’d be crying over Fargo? But the moment is so poignant and sweet and it’s just so sad. Yeah, yeah, we get that you have to show just how bad Wen is by killing someone likable, but why did it have to be Holly?

Anyway, there is intense relief that the kidnapping storyline has not been unduly dragged out. Wen is trapped in a new virtual world and Beverly is still on the loose. Oh goody. What’s next?