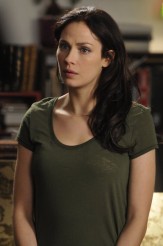 The amiable magical objects procedural comes back for a third season with a smart, funny team expansion

When we last saw the WAREHOUSE 13 team (not counting the out-of-sequence Christmas episode), a somber Myka (Joanne Kelly) had decided to leave her Warehouse duties for fear of accidentally contributing to the destruction of the world, as she felt she’d almost done.

In “The New Guy,” enter – at first reluctantly – ATF Special Agent Steve Jinks (Aaron Ashmore), who has the ability to detect when someone is lying. He’s pretty surprised when he realizes the formidable Mrs. Frederick (CCH Pounder), Artie (Saul Rubinek), Claudia (Allison Scagliotti) and Pete (Eddie McClintock) are all telling him the truth about what it is that they do, and why they need him.

Right now, the problem is Shakespeare’s lost folio, which is causing people to die in the manner of Shakespearean characters. Pete uses the situation as an excuse to drop in on Myka, who is now working in her family bookstore. Reluctantly at first, then with growing enthusiasm, Myka helps Pete and Jinks figure out what is going on and how to stop it. The successful mission brings Myka back into the Warehouse fold, but Jinks stays on as well. What none of them know is that pretty, sarcastic FBI Agent Sally Stukowski (Ashley Williams), who was trying to thwart their investigation, seemingly because they were treading on her turf, is actually in league with what seems to be big, season-long Evil.

“The New Guy” has all of the elements that make WAREHOUSE 13 fun – inventive fantasy, warm and playful camaraderie between the characters and the edge of erudition (in this case, a curse tied to Shakespearean quotations) that come together to give the series its particular flavor. Jinks’ introduction is handled very smoothly and he is given a sense of humor (although, thankfully, a different one than Pete’s). Ashmore’s performance demonstrates that he not only can step up to the plate to play a tough-guy adult on level footing with the people around him (which he didn’t really have the opportunity to do in his long-running Jimmy Olsen gig on SMALLVILLE). It’s a little reminiscent of seeing Brian Austin Greene take on the role of Derek Connor in TERMINATOR: THE SARAH CONNOR CHRONICLES, though of course both character and series here are considerably lighter in tone.

In best WAREHOUSE 13 style, the most is made of Jinks’ lie-detecting gifts to minimize exposition – when our gang tries to b.s. their way out of an awkward situation and it doesn’t work, they give him the short version of the truth, he buys it, and the story rolls easily forward. This is one of the more fun and coherent methods of getting around draggy exposition.

Myka’s absence is handled very respectfully, so that we don’t resent Jinks’ arrival. To be fair, since Myka returns within the episode, we really don’t have time to grumble. There’s also an interesting emotional resolution, or at least food for thought, concerning Myka’s erstwhile friendship with the mercurial H.G. Wells (Jaime Murray).

Altogether, “The New Guy” kicks of the new season of WAREHOUSE 13 with a strong dose of everything that is good about the show, setting us up to anticipate a highly enjoyable year to come.