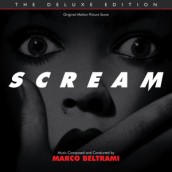 Sure horror scores before 1996 raised their voice more than occasionally. But it took Marco Beltrami to send the genre into a true fugue state with the cacophony of SCREAM’s outrageous symphonic kills, creating a whole new impactful sound for slashers and demons alike, not to mention setting the thematic template for three more franchise scores to come.

Music fans with subtler tastes might chide SCREAM for being over the top. Yet that was exactly the right tone for writer Kevin Smith’s satiric takedown of the genre. Though he himself might not have been into a horror geek like SCREAM’s characters, Beltrami still pulled off a score that managed the same feat of wittily attacking its slasher ancestors while being truly frightening in the process, a one-two combo that helped jump-start masked killers for a whole new generation. His SCREAM is full of that hip vibrancy, employing western-sounding thrash guitars, ringing in hell’s bells, and originating the unmistakable mournful melody and ghostly wail of Sidney Prescott’s theme. But perhaps the most sneaky, and seditious talent to be used from Beltrami’s old school training under Jerry Goldsmith was the idea to grab a wealth of 20th century musical techniques, then wield them like a series of blunt instruments to create a bloody, and oft since-imitated armory of orchestral shrieks and hits.

Barely 4 minutes of Beltrami’s score were included on the first SCREAM album when it was released 15 years ago on TVT records’ song-packed soundtrack (though it was kind of nice having the Julee Cruise and Nick Cave tunes nonetheless). When Varese compiled the score with SCREAM 2, the ante was raised to 15 minutes. Now this new Varese Club release has raised the grand musical tally to 65 minutes of classical Beltrami mayhem, while also allowing breathing room for the composer’s subtler, and equally effective chills. SCREAM paved the way for Beltrami to become a king of horror scoring with such diverse works as MIMIC, HELLBOY and the new THING. But for the legions of Ghost Face fans, SCREAM is the one to rule them all. This is a surely an album to turn their white-masked frowns upside down.