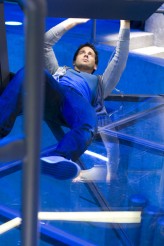 Once again, multiple plates are spinning in an episode of EUREKA. In “Glimpse,” Jo (Erica Cerra) and Zane (Niall Matter) are grappling with their relationship – with Jo wanting to call things off even though they’ve had six weeks of “last times” – and Jack (Colin Ferguson) and Allison (Salli Richardson-Whitfield) are dealing with more subtle nuances of their romance.

Meanwhile, Fargo (Neil Grayston) and visiting Dr. Holly Martin (Felicia Day) begin interviewing aspiring participants in Global Dynamics’ flight to Titan. Zane has developed predictive security contact lenses that he calls PALS that enable Jo (as head of GD security) and Jack (as town sheriff) to see the likelihood of a threat. The PALS predict an explosion that will wipe outEureka. It turns out that Fargo’s illicit use of an extra pair of PALS to help him conduct the interviews overloads the PALS core controlling device, which almost detonates before Jo shuts it down and Zane saves her. The PALS are gone, but Henry (Joe Morton) has managed to retrieve the data they’ve already registered – he and Jack are shocked to see that the PALS pegged a 99 percent probability that Allison is a security risk, which we surmise is due to whatever Beverly did to her in the previous episode.

“Glimpse” does a fine job of maintaining EUREKA’s customary balance of humor, drama and suspense, though followers of the show won’t be too surprised by Allison’s status as a danger (it remains to be seen exactly what sort of peril she poses). Having the PALS be the source of the danger they sense is a great Moebius-strip touch. On the comedy side, the interviews are amusing, with a cameo by Stan Lee giving a nice, specific shout-out to fans of the legendary writer’s Twitter feed. Once again, Day livens up the already energized environment with her performance as the brilliant, chipper but socially awkward visiting scientist. The special effects are very good, albeit viewers who also watch Syfy’s SANCTUARY may note some similarities between that show’s virtual Lost City and Henry’s visualization of the PALS’ “memories.”

One gripe – apparently someone feels that EUREKA can’t accommodate three happy couples (Jack and Allison, Henry and Grace, Jo and Zane) all at once. This may or may not be valid, but having Jo remain upset this long over something that is not remotely Zane’s fault (he doesn’t remember the other timeline because he never experienced it) is not only unreasonable, it’s starting to get tedious. We’re not learning anything new about her or the situation from having the attraction/avoidance play out this long.

Otherwise, “Glimpse” is a thoroughly EUREKA-worthy episode in both smarts and entertainment value.