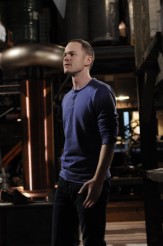 Pete and Myka in bed together ... what?!

As with last week, WAREHOUSE 13 is really shaping up nicely this season. The larger cast of Warehouse employees allows the writers to have a lot more story in one episode, and to show more sides of the characters we already know and love. Which is ironic since this week’s episode is called “Love Sick.”

Myka (Joanne Kelly) and Pete (Eddie McClintock) find themselves in bed together with absolutely no memory how they got there, and if they had sex with each other or not. Myka has blonde hair and apparently Pete has fallen off the wagon. That’s just the set-up for their part of the story which forms the back up of this episode.

Meanwhile Artie (Saul Rubinek) and Claudia (Allison Scagliotti) head out into the field at the behest of Dr. Vanessa Calder (Lindsay Wager) to investigate a series of bizarre deaths in which women are being genetically altered and turned into clay. Artie calls in Hugo Miller (Rene Auberjonois) to help them figure out some kind of anti-virus. Turns out Hugo and Dr. V. had a thing back in the day, and this is bad news for Artie who was finally getting somewhere.

Let’s just start off with the guest stars of this episode. Who doesn’t love Lindsay Wagner and Rene Auberjonois? Besides the fact that both are fantastic actors, their characters are a welcome addition any time they are on the show, and they’re really just fun to watch. Wagner looks as beautiful as ever, and it’s not difficult to see why Artie has the hots for Dr. V. It is nice to also see a happy ending somewhere down the road for Artie, or at least the hope of a happy ending.

There is some brilliant gay themed dialogue in this episode as well. Pete has a whole shirt off showing his body to Jinks (Aaron Ashmore) and has some really funny comments about being thrilled that there is a gay man around so someone can finally appreciate his body! Then later there’s an exchange between Hugo and Artie, when Hugo misunderstands and thinks that Artie has a male lover. He then proceeds to ask Artie if he would be considered a ‘bear’ which was hysterical.

Our anti-Warehouse team also adds a computer person to their roster, someone with hacking skills to rival Claudia’s. So now the question is who is putting this team together? Who is the man only seen in silhouette and what does he want?

A good solid episode working that trademarked SyFy WAREHOUSE 13 balance of action, comedy, drama, and genuine emotion. I really do love this series. I love the characters and how they interact with each other, and I think all of the cast additions whether they are guest stars or actual regular additions only strengthen the show.