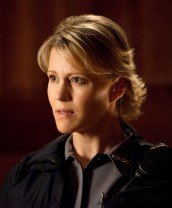 Being the sheriff of THE VAMPIRE DIARIES setting ofMystic Falls,Virginia is no picnic. Sure, it may look like a picturesque small town, but the place is full of vampires, werewolves, hybrids and ghosts. However, Sheriff Liz Forbes, played by Marguerite MacIntyre, has shown she’s up to the task, even after having to deal with the fact that her own teenaged daughter Caroline (Candice Accola) is now a member of the undead.

MacIntyre has previous experience playing a parental figure to an unusual adolescent – she was adoptive mom Nicole Trager on KYLE XY. The Michigan-born actress has worked in theatre, including the Broadway musical CITY OF ANGELS, as well as film and television. She joined VAMPIRE DIARIES in the fourth episode of its first season back in 2009. The CW series is now in its third season, Thursday nights at 8 PM.

At a party thrown by the CW on the Warner Brothers lot, MacIntyre tells us what it’s like policing a supernatural town and parenting a vamp.

AX: Had you ever played anyone in law enforcement before Liz?

MARGUERITE MacINTYRE: I don’t think I have, no.

AX: Did you do any training or research for the role?

MacINTYRE: Honestly, no. I was given a lot of pointers from people on the show about etiquette, how to do certain things, how to behave with certain firearms, why you would wear your badge a certain way or another way. So on the show, they gave me a lot of information. But frankly, if I was a sheriff in that town, and I found out all that was going on, I as a chicken would have run far away quickly, so I would have been a terrible sheriff. So I feel like she’s a lot braver than me.

AX: It’s been said that you sustained a real-life leg injury last year in the line of VAMPIRE DIARIES duty …

MacINTYRE: I would love to say it was in the line of duty. It was in the line of yoga. I hurt myself doing some yoga. I had a hamstring injury and had to have some surgery. They [VAMPIRE DIARIES producers Kevin Williamson and Julie Plec] were so sweet and they kind of worked around it.

AX: Were you worried that Liz might meet an untimely death while you were laid up?

MacINTYRE: Oh, one is always worried about an untimely death on THE VAMPIRE DIARIES, as you know [laughs]. We’re always grateful to last another season.

AX: When Liz found out Caroline had been turned into a vampire, did you give any thought to, “Now, if I were really in this situation of being someone who finds out my kid is …?” Did you fill in the blank with anything real?

MacINTYRE: Honestly, yeah. I think that’s one of the sweetest storylines. I love that storyline. It was beautiful and – I’m not a parent, but I think every parent, or every kid with their parent, has that issue. There’s something that the parent may not approve of or that you don’t approve of, whatever it might be – it could be almost anything. And I think that was one of the most passionate, thoughtful storylines, to show somebody who they built up for three seasons as being very stalwart against this one thing [vampirism], having to accept it in her daughter and her daughter having to be brave enough to share it with the mother. And I just love that. I just thought it was beautiful. You can fill in the blank. You’re right – “dot, dot, dot,” it can be anything, any adjective you want, and it’s cool.

AX: When you’re playing scenes with fellow actors who are baring fangs and have totally black eyes and a vampiric appearanc, do you psych yourself into going, “Wow, this is really scary,” or does it ever strike you as looking funny?

MacINTYRE: You know what? I have never been in the position where it seemed funny. We are very fun-loving, there’s a lot of fun on the set, but when those scenes are happening, we’re all pretty serious and they’re pretty intense and everybody stays very, very focused. So I’ve never actually had to fight the giggles on that stuff. It’s on the more pedestrian stuff, just walk and talk across the street, that makes you want to giggle, because we like each other and we’re civil.

AX: Do you have a favorite bit of physical action that they’ve let you do on VAMPIRE DIARIES?

MacINTYRE: I like when I shoot people [laughs]. I would never shoot anyone or anything, I have no experience with guns, but I weirdly found that I was good at targeting, I wasn’t bad at it. So for me, it was, “Oh, I that’s a nice thing to find out,” that you have a steady hand or whatever, so I randomly enjoy the shooting.

AX: When VAMPIRE DIARIES first started, did you think, “This is likely to get a cult following,” or has the fan response been a nice surprise?

MacINTYRE: Well, I knew the books were very popular and it was during the TWILIGHT time, so it didn’t surprise me, and having seen the pilot, I knew it was very strong, so I wasn’t surprised.

AX: And do you have a favorite scene partner on the show, somebody that you particularly like playing opposite?

MacINTYRE: Everybody is so awesome, but I’ve played a lot with Ian [Somerhalder, who portrays vampire Damon Salvatore], and he’s delightful, and a lot with Candice also. Any time there’s a scene with Candice, we’re so happy, because we love being with each other in a scene. So both of them have been really fun to work with. The two of them have been great. We’ve done a lot of scenes together and it’s always really fun.

AX: And since Liz’s daughter Caroline is not a vampire in the L.J. Smith books that are the basis for the VAMPIRE DIARIES TV series, was it a big surprise to you when she became a vampire in the show?