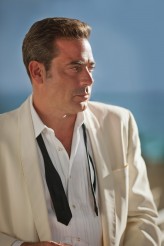 The actor talks his new Starz drama, plus fatherhood and DEAD AND BREAKFAST

In Starz’s drama MAGIC CITY, which airs Fridays at 10 PM, the Miramar Hotel in 1959Miami is awash with both glamour and crime. In the series created by Mitch Glazer, celebrities visit, as do mobsters and Cubans fleeing revolutionaryHavana. Jeffrey Dean Morgan plays Ike Evans, the hotel manager who presides over this little kingdom, which – along with his new wife (Olga Kurylenko) and two sons (StevenStrait, Christian Cooke) – is everything to him. Ike built theMiramar with help from silent partner Ben “the Butcher” Diamond (Danny Huston). Unfortunately for Ike, Ben is now much less silent, leading to a great many complications.

Seattle, WAnative Morgan made big impressions on TV as the doomed romantic Denny Duquette on GREY’S ANATOMY and as badass monster hunter John Winchester on SUPERNATURAL. In feature films, he has been the murderous Comedian in WATCHMEN and the framed special ops leader of THE LOSERS. However, he says MAGIC CITY represents new turf for him, in terms of both character and themes.

JEFFREY DEAN MORGAN: I think the first impression we have of Ike Evans is that he’s on top of the world. He owns this gem ofMiami Beach that he built from nothing. He is married to the most beautiful woman in the world. He’s got a family that he loves and adores more than anything. And that’s what he projects out there into the world. I think behind closed doors is where you, as an audience, start to see that there are some problems he’s having. He has made a deal with the devil in order to create and build his dream, and it’s going to bite him in the ass. I think that journey is a really fun, amazing dangerous journey we all get to go on.

AX: What attracted you to Ike Evans as a character?

MORGAN: As an actor, you want to do – at least, I do – I try to find something different in everything I do. And this was such a departure from what I’ve done. Lately, especially, I kind of went from being a guy in a hospital bed, Denny Duquette [in GREY’S ANATOMY], to this action warrior. I went from WATCHMEN to LOSERS and it was great, and I loved it, but it was time to do something maybe more sophisticated, more grown up, and I thought this was such a great opportunity to do that. I like as an actor to do different things, and I knew for a fact that I’d never done anything like this, I’d never seen anything like this or read it, and it was just something I had to do.

AX: The last couple of major characters you’ve played have been kind of rough and ready and hearty. Ike Evans seems to be a much more …

MORGAN: Refined. He’s a suit and tie guy, which is not me or any character I’ve ever played before. I’d like to say that all of the characters I play have a certain amount of charisma – that’s not necessarily the truth, but in my head, I say that. But this guy sort of oozes a charm and a sense of class that I’ve never had the opportunity to play before, which has been an interesting and fun experience for me.

AX: The last few characters you’ve played have been not afraid of anybody. Ike seems to be somewhat intimidated by, as well as pissed off by, Danny Huston’s Ben Diamond. How is it playing the intimidation factor?

MORGAN: They go toe to toe. But there’s certainly something to be scared of with Ben Diamond, and Ike knows it, and so he has to walk a fine line. I spent a lot of time trying to figure out how I could stand up to him without getting killed, because his nickname is “the Butcher” and it’s not because he chops up chicken. He’s a bad man. But you’re also looking at two characters that really need each other as well. So it has to be kind of this symbiotic relationship. But we go toe to toe. But a lot of times, Danny’s character will walk out of the room and you’ll see visible relief on Ike’s face that, “Oh, I got away with that conversation and didn’t get killed.”

AX: Did Ike know going into this that he was selling his soul to the Devil?

MORGAN: I’m assuming, because Ike is a smart guy, that he absolutely did know. I think he had hopes that it would go differently and that he could get out of it. And so we spend a lot of time in the first season with Ike, trying to figure out this deal with the Devil, how he can break it. Because it’s a bad situation for Ike.

AX: Given that MAGIC CITY opens in 1959, did you have any thoughts about comparisons to MAD MEN?

MORGAN: Well, I didn’t initially. I don’t watch MAD MEN, and I didn’t, I guess, realize and understand the whole MAD MEN phenomenon like I do now. I guess those comparisons were bound to happen, because I saw the comparisons happen with the other shows that came out last year [THE PLAYBOY CLUB] and PAN AM. So everything gets compared to MAD MEN. The only similarities we have to MAD MEN are suits and skinny ties. Other than that, it’s a whole different world.

AX: What kind of research did you do for the role?

MORGAN: I read some stuff, but I guess the best research I got was hanging out with [series creator] Mitch [Glazer]. He had this whole world wired so much. But I did find myself doing some research about the CIA presence, what happened in theFontainebleau [Hotel], the Mob presence at that time, how they migrated fromAtlanta toMiami Beach, the necessary stuff. But for me, walking onto those sets in those costumes, that for me is the kind of tactile way I like to work, and it sort of puts me right into Ike Evans’ mode of that time period.

AX: You actually film in Miami. Is it hot in Miami wearing the suits?

MORGAN: [laughs] You bet it is. And a lot of the suits that I wear are actually from that period that have been tailored to fit me, but they are wool and they don’t breathe, and I tend to sweat quite a bit.

MORGAN: Favorite thing aboutMiami? I love the restaurants, I love the weather, I love the beach and the ocean. I likeMiami. I had never been there before.

AX: How about the humidity?

MORGAN: I don’t like that. Not a fan of the humidity. You can take that away and keep it.

AX: How do your MAGIC CITY suits compare to the Comedian costume from WATCHMEN?

MORGAN: [laughs] I tell you what, I liked it a lot better than the Comedian costume as far as being hot. No, the suit and tie – it’s a new way to go for me. We don’t know any of my work being that kind of guy. The Comedian will always have a special place in my heart, though, man, and I still will argue with anyone – I had the coolest costume in that movie.

MORGAN: Yeah. Man, it’s bright, right? Kelly [Lynch, who plays Meg Bannock] actually said we used the same lights as for THE GODFATHER.Miami just has kind of a brightness to it. But [the episodes are] not reflective of what we saw in [the promotional videos]. This show is much darker and more sinister and got a kind of golden quality to it. It’s not bright and sunshiny. I mean, there are also some moments that are happier, I guess. But the world we live in is this Miramar Playa, and my character is under an incredible amount of stress trying to keep this ball moving, and so some dark and sinister things certainly happen and especially if we ever see Danny Huston walk into a room, we know something’s going to go down.

It’s hard to believe for me that it’s a television show, because it certainly didn’t feel like a television show. I know there are some great shows on cable. I’ve seen some of them. I’m a huge SONS OF ANARCHY guy. That’s one of the shows that I love. They’re able to do so much, I think, on cable, and Starz in particular. [Starz executive] Chris Albrecht is sort of a mad genius and really collaborative and kind of lets us go, and it makes it such a great place to come and work under that umbrella, as an artist – and when I say “artist,” I use that very loosely [laughs].

AX: You’ve done some big, popular genre things – SUPERNATURAL and WATCHMEN – but you also did a little horror movie in Livermore, California called DEAD AND BREAKFAST, which was released in 2004. Any recollections of that experience?

MORGAN: I think my fondest memories of that are, we were all the best of friends who made that movie. We were a group of friends, we had five hundred thousand dollars to make a movie, the script was written in like a week, because we had a location and we wrote the script around the location, and ten of us got in a van and went and made a movie. And that was the best part of it. There was a great bar there that we used to go to. We stayed at this little hotel right off the freeway. I liked it a lot.

AX: You were talking on Craig Ferguson about being a new father – your son was born in late 2010 …

MORGAN: He is incredible. I mean, that’s my new favorite thing, being a dad. It’s been amazing. It’s my favorite thing to do. I spend my whole day with him since we wrapped this show, I’ve purposely not done anything, so it’s been daddy/kid time. I’ve let Mom go and do a job and I just really wanted to spend time with him. I’ll say this only because I’m running out of stories to tell about him, but we took him to dinner the other night and he said, “Bullshit.” I couldn’t believe it, but at the same time, there might have been a high five involved. It made Dad laugh a lot, and I thought, “I’ve really got to start watching my language,” because he’s repeating everything he hears. But I’m a much better father than that. That’s maybe not the best story to tell, but it did make me laugh.

AX: What would you most like people to know about MAGIC CITY?

MORGAN: That it’s unlike anything I think that’s ever been done on TV. The production value, the sets, the wardrobe – and there are some really, really good actors involved in this.