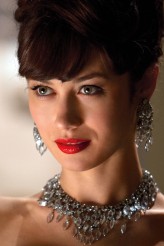 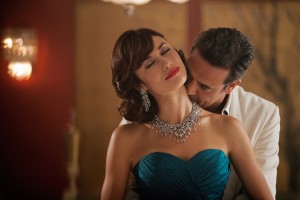 In Starz’s new Friday night series MAGIC CITY, created by Mitch Glazer, Miami’s Miramar Hotel is where it’s all happening. Hotel manager Ike Evans, played by Jeffrey Dean Morgan, has thought his job was a dream, but with the return of his silent partner, gangster Ben “the Butcher” Diamond (Danny Huston), it’s turning into a nightmare.

Further complicating Ike’s life is his gorgeous new immigrant wife Vera, played by Olga Kurylenko. Kurylenko, who hails from the Ukraine, has been best known until now by U.S.audiences for her action roles in HITMAN and the most recent James Bond film QUANTUM OF SOLACE. Vera is a change of pace role for Kurylenko, one she sounds happy to discuss.

ASSIGNMENT X: Your character Vera Evans is a European refugee who is the second wife of hotel owner Ike Evans, played by Jeffrey Dean Morgan. What can you tell us about Vera?

OLGA KURYLENKO: I’m desperately looking for real love, but it’s just very difficult. The whole[series] is an understanding of how we are trying to make a relationship grow. It’s a very tough love story. They do love each other, but it’s complicated.

AX: You’ve been working in feature films for some time. How did you become involved with MAGIC CITY?

KURYLENKO: I never thought of doing a TV series, but then the [scripts for] the first three episodes arrived, and my agent said, “Have a look at that.” And I read and I just fell in love with my character, with Vera. And I said right away, “I want to be Vera. I want to do this.” I just found there was so much too her. It was a very complex role, because she’s an outsider, she’s a foreigner. She’s an outsider in the society where she lives. It is very hard for her. She’s trying very hard to fit. She’s not necessarily easily accepted. So she has a lot to prove. She’s married to this wealthy man, and this is not where she comes from. She’s a very simple girl. She’s a working girl. She was a dancer. Suddenly she becomes this social figure and at the same time, as much as she enjoys this, I think there’s a void in her because she actually is missing the simple life of a performer. And I think once you are a performer, if you take that away from the person, it’s like someone cut your wings off. And that is this struggle, but at the same time, she’s very in love with [Ike]. And it’s real love, she’s not with him for any other reason. And how do you put this all together? She’s also trying to be a stepmother to this little girl who is a teenager, and that’s the most difficult age. So there’s so much to her, it was so interesting to explore.

AX: Vera is very stylish and has the money to dress well. How have you enjoyed working in your MAGIC CITY wardrobe?

KURYLENKO: The wardrobe is probably the most beautiful style in history, the Fifties. It looks so elegant. Everybody looks so classy, beautiful. I could wear that kind of clothes, I think, head to toe, every day. It made me want to dress that way. And I did, for five months. Everything was just so glamorous and women looked very feminine. I don’t think I wore any pants during the five months. It’s the best.

AX: You’re from the Ukraine. Are you playing your own nationality in MAGIC CITY?

AX: But you speak like you normally speak in real life?

KURYLENKO: I speak the same way, yeah. Which I think would totally be the accent, because I have an accent, so you can see that I’m a foreigner, but then you don’t really know where it comes from, so it’s all they needed.

AX: You’ve done a lot of high-profile action films, including HITMAN and QUANTUM OF SOLACE Are you happy to be doing a little bit less action, or are you hoping that your character gets to beat up a couple of people over the course of the show?

KURYLENKO: No, I’m happy not to do it. Not to say that I don’t like it, but I’m happy just for a change to do something different. I love, I enjoy doing action films. But it’s a totally different thing. I was so happy that this woman is a stepmother, a wife, just a woman that wants to work out her relationship. She’s not thinking about killing anyone [laughs].