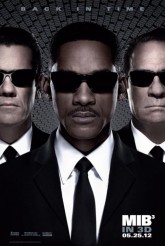 Josh Brolin is the standout reason to see this three-quel

When it came out back in 1997, MEN IN BLACK was delightful, pitting Tommy Lee Jones’ formidable deadpan as the ultimate secret government agent against Will Smith’s forthright persona as a new recruit against satirical alien spectacle. It was funny, it was inventive and it felt like the creation of people who had things they wanted to say and jokes they wanted to tell.

2002’s MEN IN BLACK II didn’t have quite the momentum as the first installment, as it tried a little too hard to recapture the tone of the first, but it had its moments.

Now we’ve got MEN IN BLACK 3, with Jones and Smith reprising their roles as Agent K and Agent J, respectively, and Barry Sonnenfeld once again serving as director. The two are still partnered within the government’s clandestine Men in Black division, now headed up by the efficient Agent O (Emma Thompson). This time around, Smith’s Agent J must travel back to 1969 in order to prevent the heinous alien Boris the Animal (Jemaine Clement), who has already escaped into the past, from killing Agent K as a young man, altering the course of history and causing the Earth to be destroyed.

The catch is that Agent J quickly runs into the 1969 version of Agent K, played by Josh Brolin in a performance that is easily the best reason to see MEN IN BLACK 3. Lots of people can do impressions, but Brolin seems to have done some sort of mind-meld that allows him to actually channel Jones’ performance. In 1969, whatever has made K so sad and solitary hasn’t occurred yet, so while the youngish agent is still laconic and no-nonsense, he’s a mite more relaxed and friendly. Smith’s Agent J can’t get over it, and neither can we.

The mechano-organic alien ships (which appear as the result of the temporal trauma that J has to correct) are reminiscent of those seen in SKYLINE and BATTLE: LOS ANGELES, but they’re still efficiently creepy-looking and fit within the design ethos of the MEN IN BLACK universe. The new film still has the same sort of specific creative spin that it always has – our heroes react with shrugs to creatures that conceal other creatures. By now, this isn’t startling, but it has a feeling of welcome consistency. Indeed, that’s the general tone of the movie. There are occasional out-loud laughs, but overall, the pleasures here are more those of familiarity. Smith’s J is likable and fun, there’s something both tragic and hilarious in the older K’s endless world-weariness and the way that Brolin makes the younger K seem so much like we already know him is a live spark that never dims.

Clement, as the malevolent Boris, is a bit like Tim Curry in one of that actor’s more roaringly villainous turns, and the makeup design is appropriately nasty-looking, like a toned-down Cenobite. Michael Stuhlbarg is sweet as an alien who can see multiple possibilities and Thompson is a pro, barking out alien dialogue with the best of them.

At times, the film seems like it doesn’t quite know what to do with its jump back to 1969, beyond relishing the look of the era. A couple of feints are made at addressing the racism of the period, but the movie doesn’t want to get too serious, so this aspect is a bit muted.

Although Etan Cohen’s screenplay for MEN IN BLACK 3 finds a way to work the “this time, it’s personal” thread into the proceedings, the film feels very much like an installment of a well-liked series (think maybe EUREKA with less machines and more extraterrestrials) than something that stands alone. This doesn’t mean that anyone who comes in without having seen the other two films will be lost – we’re up to speed in no time without exposition – just that there’s a sense of comfort rather than invention. There is spectacle here, but there isn’t much sense of discovery in it this time around. MEN IN BLACK 3 rises and falls on our connection to the main characters and, thanks to the terrific performances here – with Brolin first among equals – it mostly flies.