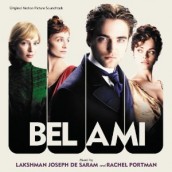 Rachel Portman, the mistress of costume drama scoring, takes on the French Bell Epoque era for BEL AMI. And in the stylistically seamless company of Indian co-composer Lakshman Joseph De Saram, Portman shows off her musical trademark of dance-like rhythms and emotive, feminine strings. Her Baroque classicism very much suits AMI‘s elegant social stratification a few centuries hence, and the seductive cunning of the ex soldier who finds his way to success through society’s hemlines.

Going for a tone that contrasts poetic beauty with the darkness that lies under the characters’ finery, Portman and De Saram’s music is impressively fashioned with equal parts beauty and the amorous amorality, with swelling, sorrowful passion at their beck and call. While there’s nothing particularly “French” about the score (especially given that few actors here attempt the accent), Portman and De Saram convey a mesmerizing sense of time and place, especially with their charming detours into the salon’s chamber music. But in the end, it’s the composers’ memorably brooding, nearly villainous theme that the score yields before.

If Portman never gets to handle another remake of DANGEROUS LIAISONS, BEL AMI does her costume repertoire very well with its stain of masculine ill repute.