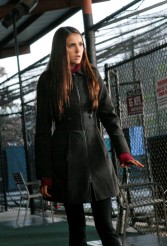 With “Heart of Darkness”, THE VAMPIRE DIARIES returns from yet another break. Anyone remember them taking this many breaks in past seasons? Anywho, this episode saw not just the return of one of my favorite guilty pleasures, but also the return of two of my favorite boys on the show, Tyler (Michael Trevino) and Jeremy (Steven R. McQueen). Not that Mystic Falls has had a shortage of unbelievably beautiful men without them, but I do have my favorites. So moving right along.

Alaric (Matthew Davis). Yes the problems with Alaric. Do we just beat the living snot out of him in the Salvatore’s basement and hope that his dark half shows up? How will the Scoobies find the last stake to appease Klaus (Joseph Morgan) if someone doesn’t man up and beat him down? Again, I am back to the point of….why? Why? Why? Alaric has literally become the character they keep around when they need to smack someone around. As long as he has his ring he can’t die so the writers can do pretty much ANYTHING they want to him and he bounces back. I liked the character when he started, but now he just seems like a joke. Find something new and better to do with him kids…a toy is not so fun when it gets broken.

Damon (Ian Somerhalder) and Elena (Nina Dobrev) got on a roadie to pick up Jeremy in  Denver, and once they get there they have a snog fest by the soda machine. That’s the most appropriate place they could think of? Elena is finally admitting feelings about Damon and I’m all for that, but now that Jeremy is back she’s going to have in house familial condescension and arguing to deal with if she wants to be with the dark of the two Salvatores.

One of the best things about this episode is the return of Rose played by Lauren Cohan, who is taking a break from killing THE WALKING DEAD, and is back to being one. She was one of my favorite vampires on this series, and her death made me cry so it’s nice they brought her back, even if it is as a spirit guide.

Rebekah (Claire Holt) is now possessed by her witch of a mother, so at least we don’t have to deal with her being a bitch and then being needy in the next few seconds after she’s threatened the life of one of the main characters. I hope that this brings about the end of the original vampires. The storyline has worn out its welcome and needs to be resolved to make way for new stories for the next season. Out with the old and in with the new!