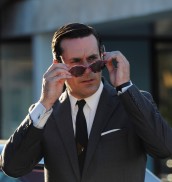 “Far Away Places” is a unique episode in MAD MEN’s history. I love the storytelling device of showing the same day through the eyes of Peggy (Elisabeth Moss), Don (John Hamm), and Roger (John Slattery). I like the sort of GROUNDHOG DAY feel that we keep looping back on the same day. Plus, this episode made me realize things that as a viewer I hadn’t even noticed were missing in the main components of the character’s lives this season.

Let’s start with Don, since he’s arguably the “main” character of the series. I haven’t seen Don Draper act like the old bastard Don in a while. It took just minutes to rediscover my deep seeded loathing of the character and the way he treats people around him. Leaving Megan (Jessica Pare) to fend for herself at an out of town HoJo is a pretty crappy way to treat your new wife. And really who gives a s**t if she likes orange sherbet or not?! It’s not as if it is the be all and end all of deserts. She wants pie….get her a slice of pie and stop being an arrogant, controlling cock about everything. The world doesn’t revolve around Don Draper’s penis (but he thinks it does). The resolution was pretty well done. I’m glad he suffered for being an ass. I think he needs to suffer more, but that’s just me. Then the big revelation at the end of the episode that Don has pretty much just been a face at the firm and has left Peggy to deal with all the clients…wow….I for whatever reason never put that together until it was pointed out to me. Time for Don to put his money where his mouth is.

Then there’s Peggy’s day. I love how far Peggy has come over the years. This episode pointed out just how much farther she has to go still. Men and clients in particular look at her as a “girl” and always want the approval of Don to go ahead with whatever campaign Peggy has worked her ass off to get done on deadline. Her blow up with the idiot from Heinz is more than deserved, and that guy got off lightly…of course not as lightly as the pot smoking beatnik in the movie theatre. When it all comes down to it, Peggy is tough. She will survive, but it remains to be seen, once Don steps back into the ring with his gloves on, how bad a beating she’ll take.

On to Roger, who if you’ve read my reviews, you know he’s pretty much my favorite on the show. Roger is still grasping and grappling with being something of a figurehead for the company. He doesn’t actively work accounts since Lucky Strike took off, and he has plenty of time to drink, and eat out just to schmooze clients, and do whatever his little heart desires. The biggest thing that comes out his LSD trip is the break up with his former secretary wife Jane (Peyton List). I really expected the acid trip to be trippier, but there were some very interesting moments in the various parts of the scenes. Honestly, I just love Roger no matter what. He can do no wrong and is always forgiven, even if he is a misogynist like Don…he has a softer personality and it makes him more loveable to me.