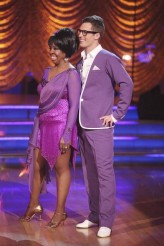 Only seven couples remain after the singer is eliminated on DWTS

Well, Gladys Knight made it through Motown Week, fittingly, and now she bids DANCING WITH THE STARS adieu. Knight and her partner Tristan MacManus were eliminated eighth tonight on DWTS, leaving just seven couples and four weeks left for Season 14.

A Motown Medley opened the show while the DWTS Troupe, along with Val Chmerkovskiy, Louie Van Amstel and partners, danced in accompaniment. At the beginning of a very long and stretched out results show – that is always the case as the duos decrease in numbers – we learned that just Jaleel White & Kym Johnson as well as William Levy & Cheryl Burke were safe in the first half hour. Melissa Gilbert & Maks Chmerkovskiy and Maria Menounos & Derek Hough were said to be in jeopardy and had to wait to see if they would be competing in the Jive Dance Duel.

The A T & T Spotlight performance was, as always a touching tribute to a performer who, against all odds, has achieved greatness in their lives. Michaela DePrince is an extraordinarily gifted ballerina who once lived in a West African orphanage and who was adopted and brought to The States by a lovely couple willing to give her a chance in life. DePrince gracefully danced while Natasha Beddingfield sang.

Insert more show stretching here, Tom Bergeron gave a quick shout out to two stars of ABC’S SHARK TANK in the audience and then we saw the weekly installment of Macy’s Stars of Dance. I am still confused about who these people are and how they come to be “Macy’s” stars of dance. At any rate, it killed some time. Hey, they got an hour to fill here.

A video on the pressures of the competition came next. When are they going to do a funny video segment with Carson Kressly or even Kenny Mayne and Jerry Rice? C’mon we need some light fare every now and then. Tonight’s show got a little too heavy at times.

Boys II Men took us back 20 years – have they really been around THAT long?  – with a soulful melody while Dmitry Chaplin & Anna Trebunskaya trolled across the dance floor.

Finally, more recapping and then Katherine Jenkins & Mark Ballas were saved and then Donald Driver & Peta Murgatroyd were as well. Knight & MacManus and Roshon Fegan & Chelsie Hightower were said to be in jeopardy. Gilbert & Chmerkovskiy were finally let off the hook followed by the release of Menounos & Hough. So, it was to be a dance off between Fegan vs. Knight. Just like last week when White beat out Gavin DeGraw, it was no surprise when Fegan was picked over Knight. Seven couples remain…stay tuned!