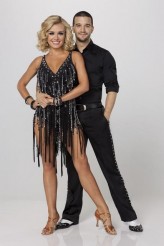 Tonight on DANCING WITH THE STARS was the most emotional night ever in the history of the show. And that’s including last year when J.R. Martinez beautifully danced the Rumba on DWTS’s “Most Memorable Year” night. The tears were flowing and the scores were glowing! Goodman, who admitted to being in a good mood, never gave anyone less than an 8! I am not sure that has ever happened in 14 seasons.

But the truth of the matter is they ALL deserve their scores. The hips were moving, the bodies were shaking and the emotions were emoting. One after another the stars came out and told a story. Stories of overcoming great obstacles, achieving your dreams and losing those close to them. Everyone has a story and tonight we saw some of these 11 people’s stories beautifully accompanied by the art of dance. It will truly be tragic, after these performances, to see any of them go home, especially since there are no low scores and five couples share a respectable, yet lowest, score of 24.

So, that leaves only a lack of popularity as the most significant reasoning to let someone go tomorrow night. It’s sad, it’s unfortunate and yet through all this heartfelt expressionism we have to remember this is a contest and though tonight was quite personal, the show is not. So, bravo to the one whom must exit after such a vulnerable undertaking and emotionally transparent week. My vote would be to not vote someone out on DWTS’s  “Most Memorable Year” week. It’s an accomplishment and achievement too great to take away from any one of them.

Donald Driver (NFL player) and his partner Peta Murgatroyd
He performed it to the max! Goodman said his Rumba had great warmth and emotion to it. Inaba said it was mesmerizing. Tonioli said he was always in control.
Scores: Inaba – 9, Goodman – 8, Tonioli – 9, Harland – 9

Melissa Gilbert (actress) and her partner Maksim Chmerkovskiy
Rock it Laura Ingels! Goodman commented on how she finally really came into this competition. Tonioli said her Jive had a beautiful beginning and end. Inaba liked the way she rocked her hair.
Scores: Inaba – 8, Goodman – 8, Tonioli – 8, Harland – 8

Jaleel White (actor) and his partner Kym Johnson
Who would have thought of Jaleel White, aka Urkel, as a sex symbol?! Inaba said he came back into the game this week with his Rumba. Goodman liked it, though he thought it was a little stiff. Tonioli called him cool.
Scores: Inaba – 9, Goodman – 8, Tonioli – 8, Harland – 8

Gladys Knight (music legend) and her partner Tristan MacManus
She is a smooth operator. Goodman liked the flow of her Foxtrot. Tonioli said it was gorgeous and Inaba thought it was sensuous.
Scores: Inaba – 8, Goodman – 8, Tonioli – 8, Harland – 8

Roshon Fegan (Disney star) and his partner Chelsie Hightower
He definitely had excitement going on in his dancing. Goodman liked the flair of his Samba. Inaba liked this the best of all his dances. And Tonioli told him Michael Jackson – whom Fegan attributes his desire to dance to – would be proud.
Scores: Inaba – 8, Goodman – 8, Tonioli – 9, Harland –8

Sherri Shepard (actress/TV host) and her partner Val Chmerkovskiy
She certainly put her heart and soul into it. Inaba said she was so true to herself in all ways. Tonioli said mama can move. Goodman told her that her Rumba was well done.
Scores: Inaba – 8, Goodman – 8, Tonioli – 8, Harland – 8

Gavin DeGraw (singer) and his partner Karina Smirnoff
He looked calmer and seemed more in tune with his performance this week. Goodman told him he saw progression in his Rumba. Inaba was fluttered with excitement. Tonioli spotted some hip action finally.
Scores: Inaba – 8, Goodman – 8, Tonioli – 8, Harland – 8

William Levy (actor) and his partner Cheryl Burke
Probably the only contestant ever – besides Giles Marini – to not have to try to be sexy. He just is! Goodman called him free Willy! Tonioli said his Salsa was amazing. Inaba said it was ridiculously hot!
Scores: Inaba – 9, Goodman – 9, Tonioli – 10, Harland – 9

Maria Menounos (TV host) and her partner Derek Hough
Wow! It was almost TOO sexy for 8pm television. She certainly sold her Rumba.
Goodman called her dance a mix of the ballroom and the bedroom. Inaba said it was exquisite. Tonioli tipped his hat to her.
Scores: Inaba – 9, Goodman – 9, Tonioli – 9, Harland – 9

Jack Wagner (actor/singer) and his partner Anna Trebunskaya
It wasn’t perfect but he gets an “A” for effort! Inaba was inspired by his Samba. Tonioli thought Wagner got the party started. Goodman called it his best dance.
Scores: Inaba – 8, Goodman – 8, Tonioli – 8, Harland – 8

Who’s Going Home: This is the toughest call ever! If I am forced to pick I think maybe Wagner will get the boot, only because I am not sure how popular he still is these days.

Who Has Legs To Take Home The Mirror Ball:
Jenkins can do no wrong… so far. She was the first to get 10s! That might be foretelling.  Stay tuned…