DANCING WITH THE STARS Season 14 Recap: Jack Wagner kicked off in Week 3 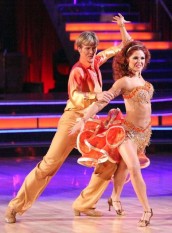 DANCING WITH THE STARS Season 14 Recap: Jack Wagner kicked off in Week 3

Another DWTS dancer gets the boot

When head judge Len Goodman was asked by co-host Tom Bergeron how he felt the previous night went on DANCING WITH THE STARS – Season 14: Week Three he concurred with what I said. This week should just roll over into next week and no one should go home. Well, that didn’t happen and instead Jack Wagner and Anna Trebunskaya were sent packing.

Before Wagner bid farewell to DWTS, Seal performed an interesting take on “Lean on Me” accompanied by two DWTS Troupe couples. Then, Katherine Jenkins and partner Mark Ballas got the good news…they’re safe! Ballas pal Derek Hough and his star partner Maria Menounos were also safe to dance another week. Roshon Fegan and Chelsie Hightower escaped elimination as well. Gavin DeGraw and Karina Smirnoff were not so lucky. They were left in jeopardy.

But, yet again, no encore performance. Perhaps the DWTS producers are trying to change up the same old routine for the audience. Either way, it doesn’t seem to matter. It’s a take it or leave it kind of segment. I guess the producers decided to leave it, for now at least.

For the AT&T Spotlight Dance, a beautiful tribute to cancer-stricken dancer Julia Ivleva was performed by real life husband and wife dancers Jonathon Roberts and Trebunskaya. Ivleva, who has stage four lung cancer, was too weak to dance herself but she watched from the audience. Another heartfelt and touching moment to match the emotional week three of DWTS.

Good news followed, however, for William Levy and Cheryl Burke who were saved, as was Jaleel White and Kym Johnson. In jeopardy were Gladys Knight and Triston MacManus. And then, in a DWTS never-done-before moment, while interviewing four couples backstage, co-host Brooke Burke-Charvet informed them that one of those duos was safe from elimination. That couple was a very enthusiastic Sherri Shepard and her partner Val Chmerkovskiy.

Macy’s Stars of Dance was up next, which frankly I could do without, and then Rascal Flatts took to the stage with a dance accompaniment by the much-missed Tony Dovolani and a DWTS Dance Troupe member. Donald Driver and Peta Murgatroyd were told seventh that they were safe, followed by Melissa Gilbert and Maks Chmerkovskiy.

Soon there were just three couples. Gladys Knight and Triston MacManus were let off the hook to leave Gavin DeGraw & Karina Smirnoff and Jack Wagner & Anna Trebunskaya to hope for a chance at week four. Sadly, there will not be a week four for Wagner and Trebunskaya. Next week we are promised a week of rock. We will see…Stay tuned!