Much better than last week's trainwreck, but it still feels like it's treading water 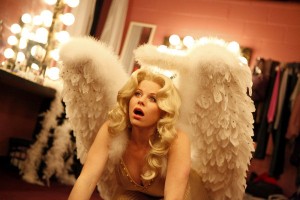 After the nosedive SMASH took last week, the only place to go was up which is what “Hell on Earth” does, but only marginally. It’s another wading water episode until we get some movie star power with Uma Thurman next week.

The big news this week is watching Ivy (Megan Hilty) go on a downward spiral into self-pity and heavy medication (shades of Marilyn?). It’s already been established she has adverse reaction to drugs and now she’s popping doctor prescribed pills like nobody’s business. She also is festering this unhealthy hate towards Karen (Katharine McPhee) who she feels is taking everything from her.

When Ivy can barely make it through a performance as a back-up performer to a stage play, she storms out, only to be confronted by Karen. Strangely, as much as Ivy hates Karen, they bond. It’s one of the few honest and pure moments in this episode. It also hints at a potential bond the two could potentially evolve rather nicely as the series progresses.

For Julia (Debra Messing), her husband finds out she was cheating on him with Michael Swift (Will Chase). It provides some soap opera-esque drama, and it brings back Swift YET again. Come on, didn’t that get resolved last week?

This subplot had to get ironed out pretty quickly, but it’s really just damaging Julia’s character even more. SMASH shouldn’t have to resort to daytime soap theatrics to primp up its drama. Sad.

Meanwhile, Tom (Christian Borle) likes his new boyfriend until he discovers he’s a Republican and then starts to have second thoughts. Meanwhile, he starts bonding with Ivy’s best friend Sam (Leslie Odom Jr.) which could lead to more than just late night chats at a local diner. Again, Borle is proving to be one of the break-out actors on this show. He’s thankfully not been saddled with a ridiculous subplot like Julia’s and you’re rooting for him because he’s loyal and quite likable.

Finally, Derek (Jack Davenport) pulls a power move when he walks out on Eileen (Anjelica Huston) feeling the project is still not ready. Eileen does her own power move which sends Derek back into the fold.

“Hell On Earth” has some strong individual moments, but it’s still dealing with the residue of last week’s stink bomb of an episode “The Coup.” All the actors are good, and there’s a solid foundation, but it would be nice if the series stopped trying to be a primetime soap opera and just go back to telling the story of a group of people trying to put on a play.