Derek's being a jerk, Julia's being tempted and the series picks up momentum 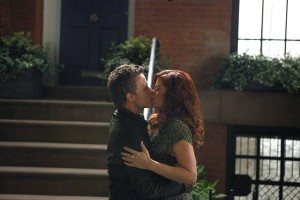 “Let’s Be Bad,” as an episode, is all over the place, but on the plus side, the SMASH writers have backed off on a couple cliches. They went hog wild on the others, though, including a final scene you could see coming from the back balcony far corner with restricted sight lines in that sound dead corner of the auditorium.

We start out with Julia (Debra Messing) still behind on pages for the show’s script, but also fighting off her male star Michael (Will Chase) in spite of feelings for him.  He talks her into going out with him to talk about the script and Julia gets a call from a strange number and ignores it.  Bad move. Julia’s partner Tom (Christian Borle) gets the call next during his less than great date with attorney. He takes it and it’s Julia’s son Leo, who got busted for pot, even though he wasn’t actually smoking, just hanging with someone who was.

Karen’s boyfriend Dev (Raza Jaffrey) is trying to get a promotion in the mayor’s office, but finds out there might be some competition. Which makes things even more interesting, since Derek (Jack Davenport) is behaving like a class a-one jerk. First, he embarrasses both Karen and star Ivy by having Karen sing in front of the cast, and then insisting Ivy take lessons from her. Gee, surprise, surprise, Ivy takes it personally.

Ivy decides to confront Derek, which does end up with them in bed, although it seems like she’s getting the idea that for Derek the show comes before all else. Karen, on the other hand, complains to Dev about what Derek did, only Dev is a little more worried about his promotion. Funny how that pretty journalist is helping him along. So Karen decides to bring what she has to the party – and wins the day. While Dev is at one table impressing the powers that be, Karen ferrets out his unknown competition.

We get one great new tune – “Let’s Be Bad,” based on Marilyn’s work in SOME LIKE IT HOT, so it’s got a nice 20’s vibe. But even more fun is Karen’s whaling on “It’s a Man’s World.” Then Michael, after showing up on Julia’s doorstep uninvited and ingratiatingly himself with Leo, starts a lovely cover of the old Leon Russell tune “A Song For You,” sung to Julia, which leads to the expected kiss which leads to Leo seeing it, which you know is coming no matter how slowly the camera pans upward to the window to Leo’s bedroom. Yes, Chase is a great singer, etc., but they have so got to find a way to dump that character. It just doesn’t work.

The musical numbers are still the best part of SMASH, hands down, and they are a lot of fun. The relationships that work the best are the most interesting ones, such as Tom’s flirtation with the attorney – they finally have sex and it’s terrible and they’re laughing about it. This seems to me like the basis for a really good, fun relationship. I am so tired of the usual jealousy and affairs – and you certainly see that on the way with the Dev/Karen story line. It’s like here we go again. It would be really interesting and different if Dev stayed faithful. It was getting interesting with Julia pushing Michael away – and it wasn’t entirely clear that she was giving in to the big kiss. I sure hope not.