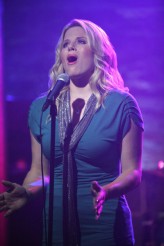 After a stunning premiere, there’s no loss in quality in another surprisingly riveting hour

After an amazing premiere episode, SMASH settles into its second episode “The Callback” with the same great writing and directing and adds some more drama to the mix.

Above all, the series knows who these characters are and the actors fit them like a glove already (and we’re only two episodes in). That’s rare in network television, but that speaks volumes for the work that went into creating SMASH.

As the title explains, this episode is all about “The Callback” for the role of Marilyn Monroe in a workshop of a new play based on her tragic life.

The two contenders are Ivy (Megan Hilty) who has spent the time on Broadway, paid her dues and who is perfect for the role. On the other side is newcomer Karen (Katharine McPhee) who is super-green but brings freshness to the part.

Everyone has their favorites, but ultimately, arrogant director Derek (Jack Davenport) has a major say in this, and after a little casting couch dalliance, the role is ultimately decided by episode’s end.

I won’t spoil the fun in the review of who gets the part, but as the producers have explained – who lands the role this episode, doesn’t necessarily mean that person will get the role when the play hits Broadway (or when the series ends its initial first season run).

What is so fascinating about this episode, is the depth that is given to both Ivy and Karen. As I noted last week in regards to the “Pilot”, there are so many shades of grey to both characters that there is not a clear heroine or villainess here. You’re rooting for both of them, and in many ways, like the producers of the play, are torn with who should get it.

More importantly, actual Broadway star Hilty is a find as Ivy. What could have been a shallow character, who tramples over everyone and anyone to get a role, is transformed into someone who is damaged and sympathetic. She is ambitious, but she grapples with her own insecurities too. The subtle moments of her waiting for an answer are gut-wrenching, because we know how long Ivy has dreamed of an opportunity like this.

Perhaps the only thing that felt a little inauthentic is the inclusion of GLEE like pop songs to fill in the gaps from the original tunes being written specifically for this show. These songs definitely tell a story, and they are somewhat organic, but for McPhee who has already sang cover song after cover song on AMERICAN IDOL years ago, it’s a disservice to her talent to have her doing the same thing here.

There’s not a weak link in the show’s cast with Debra Messing and Christian Borle doing a great job playing the show’s Broadway composers. They are the heart of the piece and they’ve made these characters so well defined and well rounded that you almost want more from them.

Not as successful is the baby drama with Messing’s Houston character. She’s trying to adopt a baby with her husband and there’s some melodrama with her son that comes out of left field too that provides the only confusing misstep in the entire episode.

Throw in a pretty steamy sex scene between Ivy and Derek that pushes things as far as Broadcast TV can be pushed, and you have a pretty solid second episode (something most series have trouble doing so early in the game).

I’m still unsure how SMASH can sustain itself, but the first two episodes get off to a fantastic start. It’s one of the brightest new shows on television – and that’s fitting for a show that’s all about lights on Broadway.