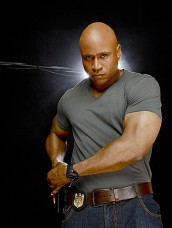 The actor/singer/producer also talks his recording company and Twitter 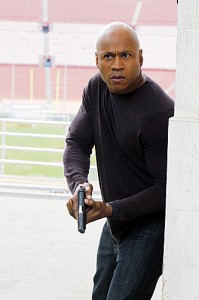 He’s a recording star, a movie star, a record company executive, a Grammy Awards host – and he’s the star of the CBS hit NCIS: LOS ANGELES, now in its third season Tuesdays at 9 PM. Ladies and gentlemen, LL Cool J.

Born James Todd Smith (“Call me Todd,” he laughs after a reporter addresses him tentatively as “Mr. J”) in Long Island, New York, LL Cool J made his album debut with the then-newly-formed Def Jam Recordings in 1985. He also made his feature film debut that year in WILDCATS; larger roles followed in movies including TOYS, HALLOWEEN H20, DEEP BLUE SEA, ANY GIVEN SUNDAY and LAST HOLIDAY.

Playing Sam Hanna, the Naval Criminal Investigation Services agent with the Officie of Special Projects on NCIS: LOS ANGELES, isn’t LL Cool J’s first gig as a series regular. He previously starred as Marion Hill in the NBC sitcom IN THE HOUSE from 1995 through 1999. However, the NCIS spinoff – LL Cool J introduced his character Sam Hanna on the NCIS double episode “Legend” – is the multi-hyphenate’s first long-running stint in a dramatic role. He and his friend Ron Gabrisko have also founded BoomDizzle Studio. LL Cool J describes BoomDizzle as a company where “a kid from Atlanta and a kid from London will be able to go online together and make a song together in real time, without ever [physically] meeting. They will be able to log into the [virtual] lobby, meet. They will be able to record music tracks, vocals and everything online, and then they will be able to mix the song there, and then they will be able to ship it off directly to iTunes or whatever form of distribution they want to ship it off to. That is the future of music.”

This interview was conducted before the recent Grammys presentation and before the untimely passing of Whitney Houston.

ASSIGNMENT X: Now that you’ve done several seasons, is the experience of acting on an hour-long action television show what you expected it would be?

LL COOL J: It was fun. Yes, it was what I would expected it would be, but it’s kind of like asking, if you really, really, really love mountain climbing, and you climb Mount Everest, is it what you expected it to be? There are just certain things you can’t prepare for, but you enjoy the process, and it’s kind of one of those things.

AX: Were any points where you felt like, “I’m going to slip and fall off the mountain” or were you just climbing?

LL COOL J: I think there are always times in any journey where you can lose your footing. No journey is going to be perfect – there’s always going to be a circuitous aspect to any journey. But it’s about just staying focused and keeping your eyes on the goal, not paying too much attention to the obstacles, so you know how to get around them, over them, under them, through them, just keep on moving. We had a good time, there was a lot of great energy on the set, a lot of passion in the air, the chemistry was right, everybody felt good about what we were doing and we just want to stay committed.

LL COOL J: I guess it would have to be the very first scene of the very first pilot. I mean, that started it all. Just jumping over two cars bumping into each other, just getting me going.

AX: What’s going on with the music producing?

LL COOL J: My company BoomDizzle.com is really exciting, really growing. We did a deal with iTunes, artists are starting to put their music out and it’s really growing.

LL COOL J: Very different. First of all, for me, when I collaborate with people in music, I’m usually writing my part, and I’m usually writing and deciding what the direction is going to be and what my vision is going to be. So how we interact, how I choose to respond is usually my decision. Whereas when I collaborate with people in film or in television when I’m not the writer, usually someone else is deciding how I respond and where I end up and where I land in the conversation. 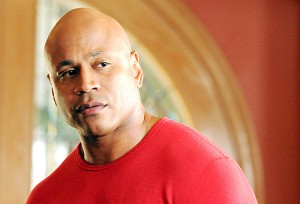 LL COOL J: Oh, of course. You have opinions about how you execute, but at the end of the day, if you’re not writing, it’s still someone else’s decision as to where you end up in the conversation. So it’s a little different.

AX: You’re also very active on Twitter and using social media to promote your work and reach out to your fans. You do your own Tweeting, as opposed to having an assistant or a publicist do it for you …

LL COOL J: I want to be hands on and I don’t feel like someone else can speak for me in that way. I don’t need a speech writer on Twitter, I need to just be sincere and let it come from me.

AX: At the beginning did you have any apprehension about using social media?

LL COOL J: There was no apprehension. It was a lack of awareness and understanding, and not being aware of the impact that it was having, how many people were affected by it, how many people it was touching, and how I could utilize it to touch more people and embrace people. It’s really a matter of just [understanding how it works]. I can go on right now and check out my followers and see the latest Tweets, who mentioned me and why.

AX: Do you have a favorite tweet that you’ve received?

LL COOL J: That’s interesting. I love the tweets where people tell me they’ve grown up to my music and that they watch the show. That’s always a nice, sincere compliment, to say, “Hey, I was in high school listening to your music and now I pull out your album and I watch the show.” That’s always a good feeling, because that means that you kind of touched that person for a lifetime.

AX: What kinds of things do you share on your feed?

LL COOL J: You know, one of the things that ended up on Twitter was something I had said awhile ago that was, “Never let somebody put a period where you put a comma when it comes to your life,” and that floated around a lot, but I find quotes from various people – Henry David Thoreau, anybody – and I just put them out there, and some get bigger responses than others. It is pretty amazing. People love to be uplifted. People love positive energy.

AX: Is this a philosophy you’ve had for a long time?

LL COOL J: Well, I mean, I grew up in the church. As a little kid, I sang for the Pope at Shea Stadium in the choir. And then from there, it just kind of was ingrained in me. But I’m not looking to be perfect – I’m not trying to turn my Twitter into a pulpit. So if somebody wants to upload a bikini picture, I’m not going to block them, you know what I’m saying? I’m just trying to make sure that it’s uplifting energy. 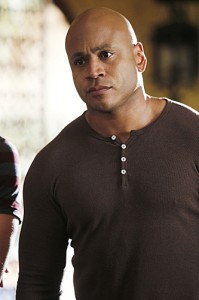 AX: Have you ever been asked to do something on the show that was in conflict with your spiritual beliefs?

LL COOL J: No, you know, no one has and I have to say, as an actor, I don’t think that my personal spiritual beliefs should come into it. It should be based on whether or not I feel I can tell the story. Because you may play the character who isn’t in line with your own personal beliefs, but the story may tell a story where that character loses ultimately. So I think it’s just about doing things that you respond to creatively, you know what I’m saying? I don’t take it that seriously on that level. For me it’s about just gut, intuition. Don’t over-think it.

AX: Is there anything you can tell us about what may be coming up for Sam on NCIS: LOS ANGELES?

LL COOL J: As you can see, the gag order is in full effect [laughs]. I don’t know so much. It’s not like a film, it’s not like I get the whole season in advance, but I wouldn’t tell anyway. It’s a lot of fun. We’ve got some cute things happening – not even cute, crazy. There are going to be a few shockers. NCIS: LA is going to be a lot of fun this year. I hope people enjoy it and watch our show and just hopefully they’ll go on the ride with us for the season. I love the vibe that we have. I just want to continue to play with big guns, big toys – you know, jumping over cars and having fun.

Related Link:Exclusive Interview with Michael Weatherly on the 200th episode of NCIS