The actress also talks about her band, animal rescue, recycling and 24 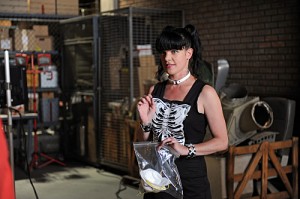 Pauley Perrette just started her ninth season as crime lab tech extraordinaire Abby Sciuto on NCIS, and while at CBS’s North Hollywood studios after a press event regarding the TV industry’s use of Twitter,  she says she disliked the concept of online social networking until she found out how it could be used.

“This women and children’s shelter in Sylmar that is very close to my heart was closing,” says Perrette. “We knew [it would take] one million six [to keep it open]. Literally, we take people off the downtown streets of L.A. and put them in this beautiful place. We had got about one hundred women and seventy-five kids and about ninety elderly people there, and it was closing. I was freaking out. I talked to my pastor – ‘What do we do? What do we do?’ My friend from church [said], ‘You should start a Twitter account.’”

Perrette resisted at first, but then decided to try Tweeting. You know what? It’s really powerful. Through that, and then a couple other things that happened, we raised $2.5 million in forty-eight hours and saved the shelter. With that much more money, we moved a bunch more people into the shelter. Instead of the shelter closing, we were able to afford that.”

Perrette, who is wearing a NO H8 button, showing her support of gay marriage in California, gives another NO H8 button to a journalist who admires it and answers a few non-Twitter questions.

ASSIGNMENT X: This is your ninth year of playing Abby. What are some of the biggest changes that you think the character has gone through?

PAULEY PERRETTE: It’s interesting with Abby, because one of the things that I actually love is that they’ve kept her very consistent. Abby is such a complicated and complex character – her job is science. What she does is more dynamic, but I like the fact that they’ve kept her pretty consistent. She’s so good at her job, she’s the heart of the team. I always try to give her a bit of memory, just because such Jurassic things happen on NCIS all the time. Her co-workers and people that she’s loved, from Sasha Alexander [as Agent Caitlin Todd, whose character] was killed, to Lauren Holly’s Director [of NCIS] – those were [Abby’s] friends, and they all got shot, and everybody’s dead, and it always happens all the time. So I try to give her a sense of memory about that kind of stuff, so we don’t forget what’s happened. But instead of huge character change all the time, I think one thing that the fans love is that she has remained very true to herself.

AX: A lot of the NCIS characters are involved in multiple-season will-they/won’t-they romantic suspense …

PERRETTE: The biggest things I get asked all the time [are], are all the tattoos real, and then, what’s really in the Caf-Pow [giant cup of caffeine]? The other one is, when are Abby and McGee [Sean Murray] going to get together? Because they dated a long time ago in the past on the show. I think it was Season One, Season Two, it was a flirtation, and then we know that McGee stayed over at her house a couple times, but now they’re definitely really good friends and really good co-workers and a lot of respect for each other, but they’ve brought it up every single season, where the other one still gets jealous if the other one sees somebody of the opposite sex. So there’s always that.

AX: Is there anything you’re particularly looking forward to this season on NCIS?

PERRETTE: We’re definitely getting some Abby back story. They [the producers] even called me over the summer and told me, “This is definitely happening.” Whether it’s going to go the way I want it to or not, who knows? Because I’m obsessed with Abby, I think about her all the time, I’ll never be that lucky that it’ll go down the way I want it to go down.

AX: Do you know if you’re going to get any flashbacks, where they make you up as if you’re a teenager?

PERRETTE: In the back story episode, no. However, they called me and [asked], “Could you go through your high school pictures and find pictures of you at prom or homecoming or something like that?” And I said, “Sure,” because I always do what I’m told. So that was pretty harrowing [laughs]. So they just have a funny picture of Abby in high school.

AX: A few years ago, you and Kristen Vangsness, who plays Penelope Garcia on CRIMINAL MINDS, were joking about doing some big crossover episode where it would turn out that your characters went to school together. Has anybody pitched that to any of the writers on either series?

PERRETTE: First of all, Kristen Vangsness and I love each other so much. She’s like the hottest chick in the world. We adore each other. Every few weeks, we say it again – “Please can Garcia and Abby get together?” The fans want it – they say it all the time, too. I’d love it.

AX: NCIS and Abby came along shortly after Mary Lynn Rajskub started her stint as Chloe on 24. Do you see any kind of smart woman techie spiritual kinship between the two characters?

PERRETTE: I was on 24 – I played a stripper. I love 24. [Rajskub is] a fantastic actress, and I know the beauty of that kind of thing. Her part was very small and she was so good that she became such a fantastic part of that show. She’s great. I started watching that show before I was on it because I’m a huge Kiefer Sutherland fan and I actually got my SAG card on a Kiefer Sutherland movie a hundred years ago, THE COWBOY WAY. I think he is a wonderful, brilliant talent. And I’m a huge, ridiculous Dennis Haysbert fan, which he knows, because every time I went in there, I was, “I love you, I love you!” I just love that man. And I also think that part of 24’s legacy – there are several influences, but the fact that that show was so huge and that they had an African-American president, played by Dennis Haysbert, and when I first met Dennis Haysbert, it’s a ridiculous fan girl story, I was so nervous, I was like [breathless], “Hey, hi, I just want to tell you, I’m a really big fan. And if you ever actually run for president, I’ll vote for you.” And he said to me, “Well, if I’m nominated, I shall run.” I love him. There was just a lot of good stuff going on in that show. 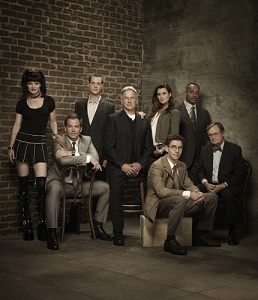 AX: With all the murder investigations and autopsies on NCIS, have you ever gotten grossed out by anything on the show?

PERRETTE: I’ve never been grossed out, not at all. Our effects guys are so good, and the bodies are so real, but I’m actually there, so I know it’s not real. I always want to tell kids, “It’s not real, no actors were harmed. It’s all in fun.” The thing that freaks me out is any kind of animal cruelty, which we’ve never done.

PERRETTE: I am an animal fanatic. I’ve actually been in several magazines with my crazy rescue dogs. I believe in animal rescue so much and I promote it so much. My two little dogs are stars on Twitter, I Tweet them all the time, #LittleJoe and #CeCeDog. CeCeDog has brain damage and snarls all the time, and Little Joe is just the cutest dog in the world. Please rescue, please. We’ve got so many dogs and cats and other animals as well that have no homes. And breeders are just force-breeding animals. We have too many wonderful animals being euthanized all the time. We don’t need that. We need to start giving the ones that we have a good home. Spay and neuter, please, please, please. And stop the insane breeding process.

AX: Do you have any other projects going on right now besides NCIS and your charity work?

PERRETTE: I’m doing music when I’m not doing [NCIS] and my charities. I’m a music fanatic. Of late, I’ve been in the studio making my record – I’ve been in a band before any of this, I’ve always been in a band – but I’ve been in the studio all hiatus making my record. My band is called Stop Making Friends. [The name is] a little funny thing about social networking. I write and I’ve been a lead singer in rock ‘n’ roll bands my whole life. My little piece of heaven is being in the [recording] studio.

AX: Does NCIS do any recycling behind the scenes in terms of paper, plastic, that kind of thing?

AX: Anything else we should know at the beginning of NCIS Season Nine?