The show must go one, even without the star 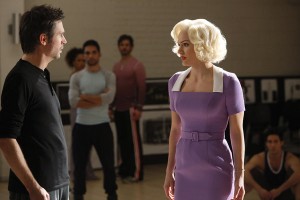 Sometimes you just wish you could holler at the writers of SMASH “the play’s the thing.” This episode, “Understudy,” gets it, well, almost. We’ve still got lyricist Julia (Debra Messing) still dealing with her husband leaving her, which is sad and all, but we’re not seeing its affect on the show. Dev (Raza Jaffrey) is having a really, really bad day, being passed up for a much-wanted promotion to a scumbucket – but again, just because he’s our charming, naive Karen’s (Katherine McPhee) boyfriend doesn’t really have much impact on the show. Unless this is supposed to be a set up for director Dereck’s (Jack Davenport) conquest of Karen, which would really be too tiresome for words.

But, again, the parts that focus on the show – those work! Just don’t get too excited about Uma Thurman’s big guest spot. She doesn’t show up until the end and has one line.  Thurman is playing Rebecca DuVal, the big film star tapped to play Marilyn in the newly minted BOMBSHELL Broadway musical. Except that DuVal hasn’t shown up for rehearsal and the show’s potential investors are getting antsy.

In the meantime, Derek taps Karen to be the understudy – Ivy’s drugged up embarrassment in the HEAVEN ON EARTH chorus having locked her out of BOMBSHELL as well. And Derek, being the jerk he is, tosses a hissy fit at Karen, who complains to Dev, who won’t tell her why he’s being such a jerk… Oh, let’s forget that bit of soap.

Anyway, things are otherwise proceeding apace with the new number and Tom (Christian Borle) stands in for the actor playing Darryl Zanuck in a steam room number that’s bloody hysterical. Except that Tom’s having relationship problems, too. His new boyfriend has noticed that Tom lights up every time he sees Sam (Leslie Odom, Jr.), again with no discernible affect on the show, so why are we seeing this subplot?

Fortunately, producer Eileen (Anjelica Huston) decides to cry into her new favorite martini and her new favorite bartender sets her up with a new investor – a rock star with more money than King Midas and who couldn’t care less if he loses it or makes more. The scene where Eileen shows up the nervous investors by letting said rock star burn up their contracts – that’s when you stand up and cheer.

Once we get solidly invested in our characters, if the producers want to slip out of the world of the musical occasionally, that would work. But right now, to get us invested, SMASH really needs to stay focused on the play and how the people who are working on it are affected by it and how their lives affect the work. Because that’s what’s interesting – not the casting couch, not the affairs, not the couples fighting.