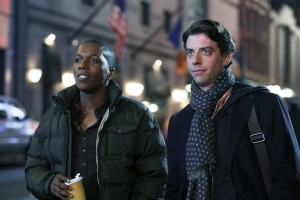 SMASH course-corrects and gets a little bit on track with “The Movie Star” which brings Uma Thurman in as pampered Hollywood star Rebecca Duvall.

There’s still tons of soapy irritants, but the ingredients that keep the show interesting is when the series focuses on putting on a show.

The struggle this episode concerns Duvall, who proves to be flighty, unreliable, bossy and not a very good singer. In fact, she keeps pushing the musical in the direction of drama because of her limitations as a singer. Thurman is great in the role and adds a much more interesting dynamic than before. She has the role, so she’s not fighting for it per se, she’s just fighting to be good in it.

Her constant diva demands and the reality that she’s not as good as Ivy (Megan Hilty) make for an interesting episode. The remaining subplots are not as engaging. There’s a continual rift between Karen (Katharine McPhee) and her boyfriend Dev (Raza Jaffrey) which needs to be over sooner than later (why can’t anyone on this show have a functional relationship?)

Surprisingly, the most interesting relationship on the series is the one Tom (Christian Odom, Jr.) is having with dancer Sam (Leslie Odom, Jr.). There appears to be mutual respect and something resembling an actual, functional relationship.

Meanwhile, Julia (Debra Messing) is still trying to repair the damage done with cheating on husband Jerry (Michael Cristofar) and the continued mess their son Leo (Emory Cohen) keeps getting into. Boring.

Overall, SMASH has been very inconsistent. And when it seems to have a good idea of what it wants to do and where it wants to go, it takes another annoying detour.

Last week, Ivy (Hilty) was completely blacklisted by Broadway, but this episode, boyfriend Derek convinces “Bombshell” to bring her back into the mix as back-up if Duvall messes up. The show can’t make up its mind. I feel like I’m watching GLEE some times.

That said, I’m all for soapy stories. Many shows that have long-running relationship woes and mismatched pairings have proven to work in the long-term. However, SMASH, like GLEE, started off with fascinating, well-shaded characters and then preceded to destroy anything likable or interesting about them in the course of the first eleven episodes. Go back and watch Debra in the first episode – and see how much we despise and hate her now.

That’s not what you want to do with your characters. Sure, make them flawed, give them drama, but don’t strip them of the spark that made them interesting to begin with.

Ironically, Hilty’s Ivy has weathered the storm the most. She’s always been a damaged, tragic character and even when her bitchiness got the better of her, the character has somehow bounced back (no doubt do to Hilty reigning in the emotions and bringing believability to the most ridiculous scenes).

I’m not sure where SMASH is heading, or if it can sustain itself for a second season, but at least “The Movie Star” seems to be bringing it back to the place of where it should be – focused squarely on the drama around the show.