Home » DANCING WITH THE STARS Season 14 Recap: Gavin DeGraw kicked off as Jaleel White saved by duel on Week 5 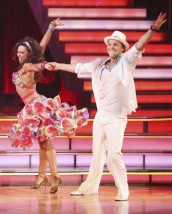 The singer and partner Karina Smirnoff exit DWTS with Class

Class and graciousness left the building tonight on DANCING WITH THE STARS when Gavin DeGraw and Karina Smirnoff were voted out fourth on the show. DeGraw couldn’t have been more gracious and kind with his exit, hugging and thanking each judge with a smile so broad you would have thought he had won the whole darn thing. But, he did not and Smirnoff did not walk away with her second consecutive win (Smirnoff won last season with her partner J. R. Martinez). In the first head to head Dance Duel the two lowest scoring couples danced off in an instant ChaChaCha beside one another. It was no surprise that DeGraw was beat out unanimously by Jaleel White & Kym Johnson. All three judges felt White’s performance was superior to DeGraw’s. Probably most of America would have agreed, if given the chance to vote, as well.

With the encore back again, Maria Menounos & Derek Hough started the show off with their wildly sexy Salsa, changing it up mid-dance with a special kiss for Carrie Ann Inaba by Hough and one for Bruno Tonioli by Menounos. What about Len Goodman?

After their hot number, Menounos & Hough were called out as safe and, surprisingly, so were Melissa Gilbert & Maksim Chmerkovskiy and Gladys Knight & Tristan MacManus. Train performed with the sorely missed pro dancer Louis Van Amstel & Cheryl Burke accompanying them on the dance floor. And then in a “Where have you been?” moment percussionist, and once upon a time Prince girlfriend, Sheila E. performed with The Macy’s Stars of Dance. Finally, another performance by a DWTS returning favorite Selena Gomez & The Scene preceded the announcement of three more safe couples – William Levy & Cheryl Burke, Katherine Jenkins & Mark Ballas and Donald Driver & Peta Murgatroyd.

A preview of a new segment called the Ballroom Battle alerted us to an upcoming dance off with Team Tony Dovolani vs. Team Lacey Schwimmer, Team Cheryl Burke vs. Karina Smirnoff, and Team Mark Ballas vs. Team Louis Van Amstel. The clarity of the competition was not revealed only that it will conclude on May 1st. So, you’re guess is as good as mine as to what that means.

As for now, next safe and not having to duel it out was Roshon Fegan & Chelsie Hightower. So with White & Johnson and DeGraw & Smirnoff the last two couples left all that we needed to see was the ChaChaCha Dance Duel. And so there you have it, White kicked DeGraw off the dance floor, who, as previously stated, was full of nothing but high spirits and smiles as he departed the floor. Now, if you are gonna leave, that’s the way to do it. As Goodman would say “Well done!” Onto week six…stay tuned!