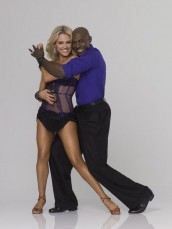 Rock Night on DWTS is a Dud!

Some things don’t go together…mayonnaise and peanut butter…driving and texting…class and Kanye West. And now we see that ballroom and rock also don’t mix. DANCING WITH THE STARS – Season 14: Rock Week blew a fuse, but not in a good way. It was close to a disaster; nearly everyone under performed, while gallantly trying to keep up with music more suitable for head banging than heel-toe pivots. Even front runners Katherine Jenkins & Mark Ballas misstepped their rock n’ roll palooza. Jenkins & Ballas dropped to third place behind Donald Driver and & Peta Murgatroyd – the only couple who moved up their scores and nailed their dance with an impressive 27 points. Roshon Fegan & Chelsie Hightower and Maria Menounos & Derek Hough also did just OK; yet still managed to tie for second with 26 points. Gavin DeGraw & Karina Smirnoff also wobbled to an adequate 23.

The rest of the pack did little to garner Rock Week press for season 15. It just didn’t fit and half of that isn’t the couples’ faults. It’s hard to keep time with the dances and the song choices made it all for the worse. Bohemian Rhapsody? We’re not going to take it? Purple Haze? C’mon how do you make THAT work? It was a lackluster and disappointing night. It’s a shame that someone is going home on a week like this. This should have been a kick ass night…instead it was as exciting as bingo on a Saturday night at the old folks home.

Donald Driver (NFL player) and his partner Peta Murgatroyd
He was aggressive and boy was he having fun! Carrie Ann Inaba agreed, calling his Paso Doble Psychedelic! Len Goodman said no one could accuse him of holding back. Bruno Tonioli thought his Paso was magnificent.
Scores: Inaba – 9, Goodman – 9, Tonioli – 9, Harland – 9

Melissa Gilbert (actress) and her partner Maksim Chmerkovskiy
This was by far my favorite dance of hers! Goodman said she attacked her Paso Doble. Tonioli told her to keep up with the dance. Inaba also thought it was her best dance yet.
Scores: Inaba – 7, Goodman – 8, Tonioli – 7, Harland – 8

Katherine Jenkins (singer) and her partner Mark Ballas
Rock doesn’t fit everyone. However, she coped well. Goodman said the dance had promise but did not deliver. Inaba told her she wasn’t on her feet tonight. Tonioli said her Paso Doble wasn’t as clean as it should have been.
Scores: Inaba – 8, Goodman – 8, Tonioli – 8, Harland – 8

Jaleel White (actor) and his partner Kym Johnson
It was interesting and intense. Goodman wanted more attack in his Tango. Tonioli thought it was an underpowered performance. Inaba loved it.
Scores: Inaba – 8, Goodman – 7, Tonioli – 7, Harland – 8

Roshon Fegan (Disney star) and his partner Chelsie Hightower
He was smooth and controlled. Goodman gave him what he wanted a “Good job Dog!”  Inaba called Fegan the best male dancer this season. Tonioli thought the movement was great in his Viennese Waltz.
Scores: Inaba – 9, Goodman – 8, Tonioli – 9, Harland – 8

Sherri Shepard (actress/TV host) and her partner Val Chmerkovskiy
This wasn’t exactly her type of dance but she entertained as usual. Goodman thought she overall did a great job. Inaba thought the Tango lacked her usual exuberance. Tonioli said it was played well.
Scores: Inaba – 7, Goodman – 7, Tonioli – 7, Harland – 7

Gavin DeGraw (singer) and his partner Karina Smirnoff
It was good but he kept sticking out his butt. Goodman called his Tango full of flair and attitude. Tonioli said his framework was bad. Inaba thought he was so in character.
Scores: Inaba – 8, Goodman – 8, Tonioli – 7, Harland – 8

William Levy (actor) and his partner Cheryl Burke
He rocked it and then…. crashed and burned. Goodman said it went wrong. Tonioli agreed, saying he went off in his Jive. Inaba also critiqued the importance of nailing the dance.
Scores: Inaba – 7, Goodman – 7, Tonioli – 8, Harland – 8

Maria Menounos (TV host) and her partner Derek Hough
Good but not her best. She just wasn’t in it 100 percent (partially due to an injured foot). Inaba loved the chemistry Hough and Menounos have dancing. Tonioli called her Tango full of sex appeal and beauty. Goodman said she lost control.
Scores: Inaba – 9, Goodman – 8, Tonioli – 9, Harland – 8

Who’s Going Home: It’s likely to be Gladys Knight, but not by a long shot.

Who Has Legs To Take Home The Mirror Ball:
Jenkins still has my vote, but Driver seems to be coming out of no where!  Stay tuned…

UPDATE: DANCING WITH THE STARS Season 14 Recap: Sherri Shepherd kicked off in Week 4