The show continues to evolve, though the CGI face effects are starting to get really distracting 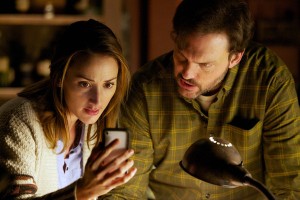 In the latest episode of GRIMM, “The Thing With Feathers,” cop Nick Burkhardt (David Giuntoli) decides to get away with his girlfriend Juliette (Bitsie Tulloch) in order to propose only to find Grimm activity a few feet away.

While staying at a getaway cabin, Nick discovers there’s a Klaustreich (Josh Randall) abusing another creature lady Robin (Azura Skye) who can essentially lay a golden egg (well, sort of). It’s valuable and the Klaustreich will do anything to keep it from escaping. With Nick getting in the way though, he now has to thwart this formidable opponent, while also keeping secrets from Juliette.

When he proposes to Juliette by episode’s end, she declines, knowing he’s keeping a much bigger secret from him. So how long will it take before he spills the beans and Juliette becomes another unofficial member of Nick’s makeshift Scooby gang? At least by season’s end, because that would make for a pretty cool season finale.

There already one additional member of the Gang with last week’s new guest star Rosalie (Bree Turner) who helps Nick with figuring out how to handle this week’s new creatures – even if it irks Monroe (Silas Weir Mitchell) a bit, who makes up the original Scooby duo with Nick.

The subplot of Nick’s cop partner Hank (Russell Horsnby) getting a spell put on him by Adalind (Claire Coffee) so he will obsess and fall in love with her is interesting, but not much as revealed as of yet. I’m still unsure where this story is heading.

“The Thing With Feathers” is not the strongest episode of GRIMM and it’s starting to get annoying when the show relies on its wholly unbelievable CGI transformations. It’s awful. Please, find money for more practical make-up effects. They look better and are not as cheesy as the CGI which is already starting to look painfully dated, and this is season 1!

Even if GRIMM is continually searching for its voice (and figuring out how to do its effects cost-effectively and properly) it still is one of the more interesting new shows. Even when it doesn’t quite work like it does here, it’s still nice to know that NBC has allowed an unlikely show to evolve into one of its few hits – even if it is banished to the Friday night graveyard at 9:00pm.