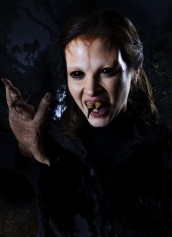 It's the kiss of the Spider-woman in all its ickiness 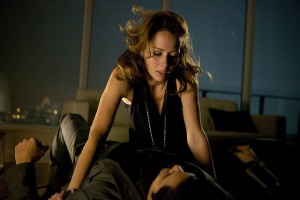 Consider “Tarantella” an episode somewhat higher than normal on the ick factor for GRIMM, not to mention the attempt at sad and tragic which felt like the writers had written themselves into a corner because there was no satisfactory way to end it.

An art lover (Nicholas Gonzales) is talking to his girlfriend on the phone while he’s dissing the art at a gallery opening, and while we see him morph into a monster, what we don’t realize is that the lady (not his girlfriend) Lena Marcinko (former ANGEL star Amy Acker) has a monstrous problem of her own. The art lover takes her home, gets rough and ends up dead.

Portland Police detective Nick Burkhardt (David Giuntoli) and partner Lt. Hank Griffin (Russell Hornsby) get called to investigate the death. The corpse has been mummified, as if it’s been dead several weeks, but there’s no question the man was seen alive the night before. Nick, who’s a Grimm – a human with the power to sniff out monsters, based on the Brother Grimm, gets suspicious and starts doing some research.

In the meantime, he’s got a little problem at home. Nick hasn’t told his fiancee Juliette Silverton (Bitsie Tulloch) about his monster-fighting ways. However, it’s getting out and about that there is a Grimm in the neighborhood, a source of fear for the local monsters since Grimms have a long tradition of unilaterally wiping them out. Since some of them are, well, monsters, Nick worries that they’re coming to get him (with good reason) and that Juliette is in danger. Worse yet, some mouse monsters have found out where Nick lives and have been vandalizing the house.

A second mummified corpse turns up and Nick turns to Eddie (Silas Weir Mitchell), a big bad wolf who has forsaken his human-eating ways to become a vegetarian, for help. Some of the records that Nick has found speak of a Japanese spider monster, but he can’t figure out much more than that’s what he’s dealing with. Eddie recognizes the creature as a spinnetod and takes Nick to see Charlotte (Dalene Young), a spinnetod who like Eddie is working against who she is. Charlotte looks like a very old woman, but is in reality, only 26. She must kill young men and suck the life out of them every five years just to stay alive.

But as we can see from Lena’s work, there is no joy in the killing. If anything, it’s just a horrifying reality for her. And for her husband and daughter, as well. Because when she isn’t killing young men, Lena is a happily married soccer mom.

The police eventually track down the family and Lena is arrested. But the arrest will kill her, fairly quickly since she didn’t get her third young man.

The one bright thing about GRIMM is that there’s a running theme that you don’t have to give in to your nature and do bad things. Nick doesn’t just wholesale kill monsters – he and Eddie are even friends. Eddie is a vegetarian. And Charlotte (what a great name for a spider woman) is aging rapidly simply because she won’t kill, either. This episode is also plays into the show’s more relentlessly grim nature and wasn’t that fun to watch. Yes, there’s humor and it’s organic, but the quips don’t feel very funny. They feel more like laughing at the ghosts you’re afraid of than anything. Let’s face it, the show is all too aptly named to be much fun.