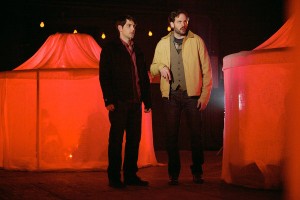 NBC is not doing GRIMM any favors with constantly preempting it and sending it on long hiatuses. The show is one of their major success stories for the network this year – and it’s been doing it in the dead zone of Friday night programming opposite two other similar genre shows FRINGE and SUPERNATURAL.

It’s a shame, because if they could find a less crowded genre time slot to put it in, the series might very well become an even bigger hit than it already is.

At least the show has been given a firm second season commitment and the back nine episodes of this season seem to be setting up some new scenarios and introducing other potentially recurring characters to add into the mix.

“Island of Dreams” begins with a botched drug deal at a “tea” shop. That “tea” shop is actually a place where legal and toxic herbs, spices and drugs are bought by the creatures that only cop Nick Burkhardt (David Giuntoli) can see.

The drug addicts kill the shop owner (Randy Schulman), and it leads to what feels like a standard cop story, but with monsters instead.

In fact, the cop story is the least interesting thing in this episode. The tea shop owner has a sister named Rosalee (Bree Turner) who finds herself in danger too. She also ends up taking a liking to Monroe (Silas Weir Mitchell) who ends up having a connection with her.

Although Rosalee doesn’t intend to stick around, she decides to take over her brothers’ shop which looks like it could be a meeting place for GRIMM’s own makeshift Scooby gang. Now we have a friendly monster working with Nick (i.e. Monroe) and now we have someone who knows how to mix magic potions and reveal other information to Nick.

Also making for an interesting subplot is Captain Renard (Sasha Roiz) enlisting his attractive blonde monster lackey Adalind (Claire Coffee) to put a spell, so to speak, on Nick’s police partner Hank (Russell Horsnby). That subplot is set up, but it isn’t resolved looking like it’s probably going to carry on for the next couple of episodes – it will be interesting to see how this all plays out.

“Island of Dreams” is a good episode that is edging more and more into heavily serialized territory. That’s a good thing, because the ever-evolving supporting cast is getting more interesting as well. I’m not sure where GRIMM is headed, but it’s an enjoyable series that keeps getting better. Now if only it could get rid of the terrible CGI monsters every episode, it would be just about right.