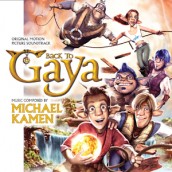 CD Review: BACK TO GAYA soundtrack

As with the final works of such ailing composers as Jerry Goldsmith, Michael Kamen didn’t let sickness diminish the talents that first landed him on the Hollywood map, namely a flair for orchestral writing. And like the equally missed Goldsmith, Kamen’s memorable swan song would be for an animated film.

BACK TO GAYA (otherwise known by its equally confounding titles of  THE SNURKS  or BOO, ZINO & THE SNURKS) is no LOONEY TUNES: BACK IN ACTION or the Kamen-scored IRON GIANT for that matter. And that’s one big reason why this otherwise terrific soundtrack has languished in obscurity until Movie Score Media has come along to do it justice.

Perhaps it was Kamen’s background at giving a symphonic rock and roll voice to the likes of Pink Floyd that made the composer approach his bigger orchestral scores with a swashbuckling attitude, a humorous, over-the-top heroism that infused the likes of  BRAZIL, DIE HARD and HIGHLANDER.

It’s this rollicking spirit that shines brightly in GAYA‘s tale of annoying, Smurf-like characters being propelled from their TV toon realm into our world, These two realities provide the key for Kamen’s approach for a score that’s at once happily home in a Carl Stalling-like realm of toon comedy, while just as quickly segueing to Kevin Costner-worthy thrills.

If GAYA might remain unwatchable for anyone over the age of six, Kamen’s music works precisely because it plays the film’s shenanigans with the kind of uncondescending commitment that’s just about as great as anything the composer produced in his Hollywood glory days, complete with a neo-historical sense of adventure that makes GAYA a grand throwback to the trumpeting style of THE ADVENTURES OF BARON MUNCHAUSEN  and ROBIN HOOD.

Another stunning revelation in GAYA‘s winding history is that Michael Kamen didn’t live to finish the score himself. Instead, fate left it up to his collaborators Steve McLaughlin, Christopher Brooks, orchestrator Robert Elhai and their enthusiastic team to turn the composer’s thematic ideas and sketches into a cohesive work. How they did it so well with Kamen’s beloved Abbey Road Orchestra makes for a moving tale in GAYA‘s lavish liner notes by album producer Mikael Carlsson.

His Movie Score Media label certainly knows the treasure it’s dug up here. And BACK TO GAYA is certainly one their most noteworthy releases, no more so than in revealing how vital, and eternal Kamen’s boisterously sound remains, or the loving effort it took to realize his unintended swan song.

Related Link: Click on link to buy BACK TO GAYA soundtrack