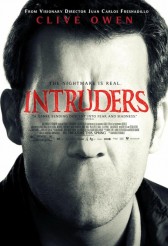 With a preteen girl and a small boy both flickering between the real world and a scary figure who threatens to drag them elsewhere, INTRUDERS has notes from movies as diverse as PAN’S LABYRINTH and A NIGHTMARE ON ELM STREET, while the suggestion that found objects can become deadly may remind some of BOOGEYMAN (the 2005 film co-written by Eric Kripke, not the 1980 Ulli Lommel title). Homage and reference to a number of other horror films, some solid and others with just a few good ideas, abound here. This means that for a good portion of its running time, INTRUDERS is truly unnerving. However, once we catch on, the movie takes a surprising turn that winds up somewhat muffling what has come before.

In Spain, a little boy named Juan (Izan Conchero) amuses himself and his single mother (Pilar Lopez De Ayala) by making up monster stories. However, when a faceless figure enters his room by night and attempts to drag Juan away, the stories seem to have come true.

In England, construction worker John Farrow (Clive Owen) adores his wife Susanna (Carice Van Houten) and their young daughter Mia (Ella Purnell). When Mia says there’s a man in her room, John at first thinks she’s having nightmares, but then gives credence to the possibility that there may be an actual intruder.

Director Juan Carlos Fresnadillo (28 WEEKS LATER, INTACTO) has a lyrical sense of style. In this universe, things are spooky and mysterious (as befits something without a face of its own) rather than overt, with many scenes looking as though they could be taking place in our world or another, the better to segue back and forth. To the credit of screenwriters Nicolas Casariego & James Marques, even though one big plot point can be surmised even before it’s revealed, exactly what’s going on here won’t be guessed by most viewers in advance.

There’s also a lot of genuine warmth between the characters, particularly Owen’s protective father and Purnell’s bright daughter. (Owen fans will see some echoes of last year’s TRUST here, though John is far more accessible to his child than the other film’s protagonist.) Owen is the epitome of the caring parent, Purnell makes Mia smart and likable and we really feel for Conchero’s frightened Juan. Kerry Fox makes a strong impression as a kindly and concerned therapist.

However, when INTRUDERS brings in its most original element, it has the effect of throwing the rest of the film somewhat out of alignment. It’s a truly intriguing notion, but it doesn’t serve what precedes it. Instead of making the story more resonant, this aspect muffles things.

Much of INTRUDERS succeeds in the arena where fairy tales meet true adult horror. The filmmakers either let ambition get the best of their instincts, or else really couldn’t find an organic finish to what they began with such finesse. Either way, the end result is a good and watchable movie, but also one that wanders away from its ultimate potential.