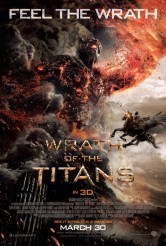 Movie Review: WRATH OF THE TITANS

The 3D is better, the story is less so, and the mythology is not so much ancient as just overused in this sequel

WRATH OF THE TITANS is actually more or less okay, but there are a number of elements that offer themselves up for nitpicking criticism at the outset. For one thing, while “titans” was being used figuratively to describe large and imposing beings and monsters in this movie’s forerunner, 2010’s CLASH OF THE TITANS (itself a remake of the 1981 goofy fantasy), here there is a literal Titan, Kronos. We’re told there are other Titans, but it’s not really clear who they are. Not that it matters, as Kronos seems wrathful enough for all of them.

Kronos is the father of the Greek gods Zeus (Liam Neeson), king of Earth, Poseidon (Danny Huston), king of the oceans, and Hades (Ralph Fiennes), king of the underworld. As Kronos tried to kill his sons (the movie doesn’t mention it, but Kronos managed to kill a lot of his kids), they trapped him in the underworld’s impregnable prison Tartarus, seemingly forever.

Forever has turned out not to last all that long, though. It’s been ten years in story time since the events of CLASH. During this decade, Perseus (Sam Worthington), the half-god/half-human son of Zeus, married his fellow demigod Io (played in CLASH by Gemma Atterton, who is not in the new film). Io has passed away, so Perseus has given up his heroic ways and settled down to raise their young son Helius (John Bell). Zeus knows that Perseus just wants to stay home and be a good parent, but the god pleads with his offspring to save the world from Kronos, who is threatening to break free from Tartarus and destroy the world.

Perseus feels that being there for Helius is more important than Zeus’ request/warning. Now, this might make sense if Perseus hadn’t been through the events of CLASH, but by now, you’d think when his father, ruler of the gods, shows up and says the world is in danger of ending, Perseus might understand this isn’t just a figure of speech or pessimism. He also might deduce that his son Helius will need a more or less intact planet if he’s going to survive to adulthood. Nevertheless, Perseus refuses to comply with Zeus’ summons.

This results in Zeus getting captured and trapped in the underworld. The immortality of the gods is fading while the power of Kronos is growing, so that he is able to unleash monsters and warriors upon the land. When Perseus is told by his uncle Poseidon of Zeus’ imprisonment and Perseus’ village is attacked by a fire-breathing dragon-like creature, he decides to join the fight after all.

There is a heroic quest, adventures with various entities out of Greek mythology, and a lot of philosophizing about fathers and sons. There is also brother/brother and brother/half-brother conflict and bonding between Zeus and Hades, between Perseus and jealous full-god half-brother Ares (Edgar Ramirez) and Perseus and half-bonkers cousin Agenor (Toby Kebbell), son of Poseidon.

The scenes between Zeus and Hades have some spark to them, as Neeson and Fiennes are on the same wavelength. It’s a safe bet that when they were doing SCHINDLER’S LIST together way back when, they didn’t envision this as their onscreen reunion, but they do generate a sense of shared history and affection that even that bad blood between their characters can’t obliterate.

Worthington is a fine actor and physically is up to the multiple challenges of playing Perseus, but the character is scripted so unimaginatively that he’s given little chance to shine. Ramirez manages to find an emotional core within the icily furious Ares and Bill Nighy does everything that can be done with the late-appearing role of legendary weapons-maker Hephaestus.

The CGI creatures are mostly very good and the gradual appearance of Kronos is accomplished with admirable build-up. Volcanic eruptions are handled well, with bits of flaming ash and lava flying off the screen. The 3D here, while not strictly necessary, is at least decent (in contrast to the 3D in CLASH, where characters meant to be at the same screen depth appeared to be wildly different sizes).

WRATH stumbles both with its sense of humor and with its structure. The writers don’t appear to know how to write levity that easily comes out of the situations, leaving the actors to strain mightily to sell what are clearly meant to be jokes. The story arcs don’t tally with any recorded mythology. This would be fine if they meshed together for the purposes of this movie, but instead, the plot beats seem to have been copied out of some archaic playbook. The only reason for Perseus to initially defy Zeus appears to be that the filmmakers think this will make his eventual return to the cause more dramatic, when it not only plays as conflict for conflict’s sake, but also makes Perseus seem pretty dim-witted in the bargain. It seems to take ages to get from one action sequence to another, and at least one character starts out as so cartoonish that his redemption simply doesn’t work because he’s neither funny nor suited to his surroundings.

WRATH OF THE TITANS has some good acting, good fantasy monsters and 3D that is inoffensive. It also has long stretches of material that feels like we’ve seen it before one way or the other. If the former sounds appealing and the latter isn’t a deterrent, it’s acceptable sword, sandal and Titan fare.