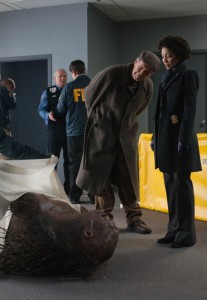 After a couple of solid weeks, the “Nothing As it Seems” episode of FRINGE takes a detour in monster-of-the week territory that just seems to out-of-place in the FRINGE universe.

“Nothing As It Seems” revisits a previous case from Peter’s original timeline about the man who turns into a monstrous humanoid porcupine. That case is revived in the new timeline, but things are drastically different.

What we learn is people are trying to enhance themselves to be better than humans and evolve into these new creatures. David Robert Jones (Jared Harris) is revealed to be behind all of this – creating some sort of strange Dr. Moreau version of Noah’s Ark but with creatures instead of animals.

Aside from the porcupine creatures (with wings no less) being quite ridiculous, the episode is saved by the little small moments that creep in throughout. Walter (John Noble) digs up all the presents he got Peter (Joshua Jackson) every year he wasn’t there so Walter could grieve. This is a pretty great moment that plays out off and on throughout the episode.

I also liked seeing Lincoln (Seth Gabel) and Peter hash it out over the battle for Olivia’s affections. It’s a wonderful little scene – and we’re starting to see how intense Lincoln’s feelings really are for Olivia.

These little moments though don’t really salvage the episode from the X-FILES-esque porcupine tale. It’s great to see the show revisit an old case in a new way, but it wasn’t that interesting the first time around either.

You can’t win them all though, and even as a lukewarm episode, there are still many small moments that at least make the episode tolerable. FRINGE is never dull or boring, but sometimes it stretches a little too far outside its formula and unfortunately has a misstep like “Nothing As It Seems.”