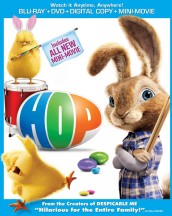 While Santa Claus has the market cornered on movies made on his life, the Easter Bunny, the second most important children’s holiday icon, has not been overly exploited as it could have been.

Aside from the classic Rankin-Bass stop motion animated productions in the early 1970s (THE EASTER BUNNY IS COMING TO TOWN, HERE COMES PETER COTTONTAIL). it’s been pretty dry until HOP arrived last year in theaters.

Now the Blu-ray is here, just in time for Easter and it’s a visual feast. It’s the story of teenaged E.B. (Russell Brand), the heir to the Easter Bunny throne – but he just wants to be a drummer. It takes a slacker human named Fred (James Marsden) to show him the true meaning of destiny – and what it really takes to be the Easter Bunny.

The movie definitely falls in line with other live action/CGI creature films like ALVIN & THE CHIPMUNKS and THE SMURFS. There are similar scenarios and set-ups, but HOP also has the whole untapped Easter Bunny world to keep it visually arresting. With Santa Claus, the world has pretty much been set in stone, but there’s more liberties that can be taken.

How does the Easter Bunny get around? Well, he has a Santa-like sleigh (shaped like an egg of course). There’s also the gorgeously designed Easter Bunny factory where all the candy is made.

There is some potty humor, and some of it works (like E.B. pooping tasty jelly beans) and Marsden is a good foil for Brand’s voiceover work.

HOP could have used a little more of Easter Bunny factory moments and less real-world shtick, but the balance works out okay and the movie definitely appeals to the kid-faction while also making things tolerable for adults.

The special features include a new mini-movie (though it’s pretty uninspired frankly when you compare it to the things Pixar does), a featurette on the making of HOP’s world, Russell Brand goofing off with a bunch of kids and the HOP premiere “according to Carlos”.

Overall, a highly underrated film that is likely to become an Easter classic in years to come. There isn’t much competition too, so HOP, for the time being, can hop to the front of the class in no time.

Comics Vs. Movies: Moira MacTaggert of X-MEN: FIRST CLASS - Things You...
Blu-ray and DVD picks for the week including SMALLVILLE: THE COMPLETE ...
Breaking News: ALCATRAZ Season 1 finale will build to a conclusion and...
New 4K, Blu-ray, DVD and Digital Releases for 9/17