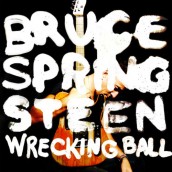 When you have so many great albums under your belt like Bruce Springsteen (BORN IN THE U.S.A., DARKNESS ON THE EDGE OF TOWN, THE RISING), you can pretty much do whatever you want and it isn’t going to tarnish your legacy.

There have been some near misses, some grand experiments and a handful of very good songs over the years from Springsteen, but it was that spirit of experimentation that kept The Boss from getting stale even if consistency wasn’t always the mission.

Thankfully WRECKING BALL remedies all that. He’s a hit a home run again.

When times are hard, Springsteen brings out his inner Wood Guthrie, intended or not, and finds a way to connect with the world. THE RISING, even though it was written before 9/11 became an unofficial anthem for the times. BORN IN THE U.S.A was a shining rock beacon in the middle of the shallow, greed-minded 1980s.

With WRECKING BALL, he’s dealing with where society is now – the problems we’re facing, the uncertainty, the lack of solid ground. There’s hope in here, there’s despair, but at its core is an album that gets your foot stomping and with each repeated listen reveals another musical layer you didn’t quite expect.

The first single is “We Take Care of Our Own,” a track I felt never properly built into the all out rocker it should have been, but within the context of the album, it fits in quite nicely and it grows on you.

There’s an acoustic folk flavor to the album such as songs like “Easy Money” and “Shackled and Drawn” – enhanced by a full on gospel choir. Yet these songs also have the Boss backbone – something that gives it a little extra oomph and identity.

The album slows down with “Jack of All Trades,” one of the softer oasis’ in an otherwise up-tempo album. While a nice song, it does throw off the momentum on the disc with its placement.

There’s an Irish flavor that creeps into the proceedings as well, evident the most on the jig called “Death to My Hometown.” With track names like that, you might expect this to be one depressing, but it’s not. It’s more hopeful in a strange way that the Boss’s disappointing 2009’s WORKING ON A DREAM that felt more crass and shallow despite its noble intentions.

There is some Bruce of old creeping in the album too. “Wrecking Ball” is the kind of song he was writing during the BORN OF U.S.A. era. It’s such a great song about dealing with adversity as your dreams (and hometown) is torn down exemplified with such lyrics as “When The Game Has Been Decided/And We’re Burnin’ Down the Clock/And All Our Little Victories And Glories/Have Been Turned Into Parking Lots/When Your Best Hopes and Desires/Are Scattered To the Wind/And Hard Times Come and Go.”

This guy still has it.

Both “Rocky Ground” and “Land of Hope and Dreams” features additional vocals by Michelle Moore which brings a different kind of vocal enhancements to Spingsteen’s tunes. “Rocky Ground” even has an ill-advised mock-rap, but the song recovers from it.

“Land Of Hope and Dreams” is an older song, but fits perfectly on this disc (and also features the last saxophone appearance by long-time E. Street member Clarence Clemmons before he passed away last year). Another older song “American Land” is one of two bonus tracks on the deluxe edition.

It’s so easy to give an artist of Springsteen’s caliber an easy pass. You see it happen all the time with critics who praise the latest Paul McCartney disc or Brian Wilson solo album. But they’re really judging it based on their legacy and not the quality of actual content of the current music.

It’s nice to not to have to do that with Springsteen. He works for his accolades and he’s working up a big sweat here to ensure that WRECKING BALL is about something, it means something and is also accessible and enjoyable for his longtime fans as well as everyone else. It’s been quite awhile since he’s been this reinvigorated and this on target, but when you have the kind of talent he has, it’s not so much about coasting, it’s finding a new way to dress up your muse in order to make a statement and say something meaningful about society.

Tags: American Land, Bruce Springsteen, CD, Death To My Hometown, E. Street Band, Easy Money, Jack of All Trades, Land of Hope and Dreams, Rocky Ground, Shackled and Drawn, Swallowed Up (In The Belly of the Whale), This Depression, We Are Alive, We Take Care Of Our Own, Wrecking Ball, You've Got It, album