It's time to the get the show on its feet, with all that goes on around it 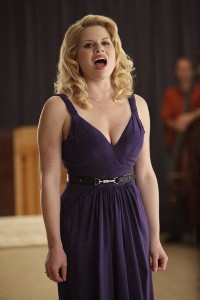 I have written repeatedly that it’s the singing and dancing that makes SMASH so fun to watch, and while “The Workshop” proves my point quite neatly, I think I am going to have to revise my thesis a little. When the show becomes about who is sleeping with whom and the petty in-fighting, well, then it loses what makes it special and unique – it becomes just like any other mildly soapy series on TV. It becomes clichéd and trite and you end up wanting to throw things at the TV because the writers are so darn close and totally missing it.

When, however, the show becomes about the great fool’s errand that is putting on a Broadway show – equal parts passionate creativity and stone-hearted commerce – then it becomes something special. Then you see the reality that spawned all those clichés. And it’s a much better show for it.

Case in point – “The Workshop.” The episode is about the play’s workshop performance before the potential producers – the folks willing to pony up the bazillions of dollars it will cost to put the show on. Everyone desperately needs to sell the show to these producers to keep on working. But, but, but….

Naturally, everything goes wrong. The studio is over-heated because there’s a problem with the boiler that can’t be fixed right away. Ivy, the star, is getting really, really nervous, and her mother – who just happens to be Broadway Legend Leigh Conroy (played by real Broadway Legend Bernadette Peters) – has not only shown up and drawn the spotlight, she’s a master mind at undermining Ivy. The book is off and most importantly, the affair between star Michael (Will Chase) and lyricist/book author Julia (Debra Messing) suddenly erupts into a whole new ending for a scene. That horrible, bland, pointless affair suddenly has a place – because it’s now about the effect the affair has on the show, rather than how it’s affecting Julia and Michael. It’s still a done-to-death-and-taxes plotline, but it comes close to working in this episode.

Better yet, when that skeezy skank Ellis rats Julia and Mike out to producer Eileen (Anjelica Houston), she nails his skanky little backside to the wall, letting him know that while it is good information to know, if he even thinks of repeating it, well, you know the line. Yes, the old you’ll never work in this town again thing is a cliche too. So is the skanky assistant ratting out the affair in a blatant attempt to curry favor, but because Eileen handles it graciously and is more interested in the show, you get a nice twist on the old theme and it works.

It’s one of those subtle differences that makes all the difference. So, let’s hope they keep the focus on the making of the big show. Then all the sleeping around and petty in-fighting and other stuff will make sense.