The actor talks playing the ship's mechanic on the spooky expedition 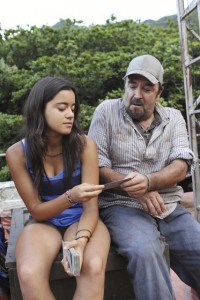 In ABC’s THE RIVER (which airs its Season 1 finale tonight), a mixed group of documentary filmmakers and other personnel voyage along the unknown byways of South America’s mighty Amazon in search of a missing naturalist. They find plenty of supernatural peril along the way. Of course, they wouldn’t get very far without an engineer, which is where Daniel Zacapa’s character Emilio Venezuela comes in. Zacapa in reality was born in Honduras and employs a Honduran accent as Emilio. It’s therefore a little startling to meet Zacapa and discover that his everyday accent is standard U.S.

Zacapa is attending ABC’s party with one of his adult daughters, Libby Pearson. Being a father in reality, Zacapa feels, helps him in portraying the father of Paulina Gaitan’s character Jahel.

DANIEL ZACAPA: [Pearson] is the youngest of two daughters that I’ve been blessed to have and I don’t think I could have done as well as she’s done and I couldn’t be prouder as a father in what she has done with her life, but I don’t think I’d want a parent that was an actor. I think that’s crazy. That’s got to mess with your head sometimes.

AX: Well, would you want a parent who’s a boat engineer on a haunted boat?

AX: Did you do any research for the role of Emilio in terms of learning about engineering or the Amazon?

ZACAPA: Absolutely, after I got the part. Actually, between the first audition and then the second audition and the screen test, I came in with a boatload of information about diesel engines [laughs]. I think I impressed them. I didn’t break character the entire time that I went through the audition process. When we went to Puerto Rico, they went, “Oh, my God, what have we done?” Because I went up and said [in real-life accent], “Hi, I stayed in character as I believed Emilio Valenzuela to be from Day One.”

AX: How difficult is it doing Emilio’s accent?

ZACAPA: I’m really good at accents. My Spanish I need to perfect, as my costar, the very beautiful and talented Paulina Gaitan [a native Spanish speaker is helping with this]. I only spoke Spanish until I was four, and then my father wanted to communicate with me, because he’s an English [speaker] of Scottish extraction, so thus began my long journey in knowing Spanish, then knowing it’s in my bones, then having to relearn it. Obviously, playing this character, I need to be fluent, hopefully, as I continue to grow with my Spanish skills. Paulina is doing the same thing with her English skills. We’re supposed to be in the Amazon, which is South America, but Central Americans pride themselves on speaking a kind of Castilian that is much closer to a South American accent from Colombia or Venezuela or Peru or Argentina. 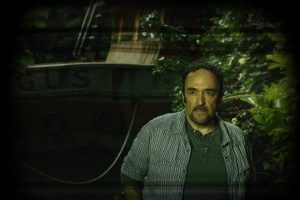 AX: Do the show runners let you give input into your character?

ZACAPA: Sure. When I told them I wanted my character to be from Honduras, Central America, where I’m from – my mother was born in Honduras – they allowed me to put some Honduran flags on the ends of the engines in the engine room, on the diesel engines, so we’ve already established that he is a Central American.

AX: A lot of scary things happen on board the ship during the course of THE RIVER. Will he ever have serious doubts about the expedition?

ZACAPA: In episode eight, the final episode, is heavy with my character. We shot it in Honolulu in November and we left the audience with some really fun things to think about, [regarding Emilio’s] relationship to his daughter, because some information is revealed in episode eight that up until that point you’re not aware of, which in major in terms of what my daughter may or may not feel about me in relation to her other parent. In exploring a Latino father/daughter relationship has been really a wonderful thing, too, because it’s different than other relationships.

AX: Is this subject matter of THE RIVER something that was already interesting to you before you got the job?

ZACAPA: Spirituality – the exploration of the why of life and why we’re here and what is the purpose of life, yeah. I’ve always dabbled in that.

AX: Do you feel that THE RIVER covered that well?

ZACAPA: I hope so. [We laid] the groundwork for people to get engaged with the characters and care about the characters, and want to come back and watch it from one week to the next.

AX: Some of your fellow actors on THE RIVER were given cameras to record with during the shoot. Were you given a camera?

ZACAPA: One time. It was heavy and it was one o’clock in the morning and we were going through a cave and it was dark and slippery and wet [laughs]. It was fun.

ZACAPA: Yes. I’ve been cast in Ron Perlman’s directorial debut. My best friend wrote a script which Ron is going to be directing in April. They’ve already signed Joaquin Phoenix and Hal Holbrook and Ron told my friend Brian Turner, who wrote WOODEN LAKE, to pick the role that I wanted to play and I play the bartender. It’s a small film, it’s a drama. People wonder why Ron Perlman of HELLBOY and SONS OF ANARCHY fame would want to make his directorial debut in this very personal and small film, but he loved the writing and the story and I’m just blessed – I’m at that point in my career where I can be offered a role and not have to audition every time out the gate. So that’s truly great.