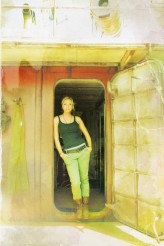 The actress talks stunts and scares on the ABC horror series 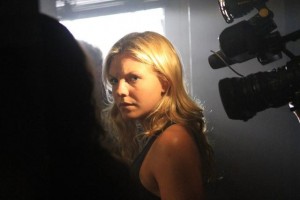 In ABC’s THE RIVER, Tuesdays at 9 PM, a documentary crew sails along the Amazon River, seeking traces of missing naturalist Emmet Cole (Bruce Greenwood) and finding a few traces – along with a whole lot of supernatural menace. The series is co-created by PARANORMAL ACTIVITY auteur Oren Peli and Michael R. Perry.

While most of the characters have family or work ties to the missing Emmet, Eloise Mumford’s character Lena Landry is there seeking her own father, along with a sense of purpose. There was closure this past week to that part of her arc with the “Peaches” episode where Landry finally found her father, but the outcome came with its own set of consequences which is par for the course of this series.

Mumford, originally from Washington State, had series regular roles in Starz’s CRASH and Fox’s short-lived LONE STAR. Mumford reveals that, while she has been too scared to watch Peli’s scary hit feature, she and her RIVER colleagues had some possibly otherworldly experiences during the making of the series.

ASSIGNMENT X: How would you describe Lena Landry?

ELOISE MUMFORD: [She is] the daughter of a member of Emmet Cole’s crew, and she’s tough and fierce and smart and very funny, but she’s been spending the last two years working at a [mundane job] in Colorado, so she’s not feeling very fulfilled in her life. So when she comes back on the river to search for her father, as well as Emmet Cole, she finally realizes that she feels alive there and that it gives her life some sort of meaning. So she spends the whole season not only searching for her father, but trying to figure out her role in the greater mystery of it all. I think it’s definitely scary – she gets thrown around a lot during the pilot and I think that instills even more fear in her, but she feels more at home, I think. Out of everyone, [she’s] the one who’s the most comfortable and excited to be there, but also, there’s this horrible fear of what might have happened to her father. 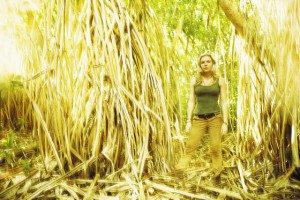 AX: When we see Lena getting thrown around, is that you or is that your stunt double?

MUMFORD: The only time I used a stunt person was in a pretty intense stunt, which at that point wasn’t safe for me to do and [the stunt double] was incredible. But everything else that you see is me doing it.

AX: Have you done wire work before?

MUMFORD: No. The [stunt] in the pilot – that whole thing, that was the first time I’d ever done wire work. Jaume Collet-Serra, the director, came up to me beforehand [and said], “We’re only going to do this once if nobody else messes up,” so we only did one take of it, so the surprise on my face was not a whole lot of acting [laughs]. It was pretty scary.

AX: Did they put pads on you to lessen the impact when you hit the wall?

MUMFORD: The wall I actually hit was a partially foam [rubber] wall, but honestly, it hurt. You’re getting thrown with a lot of force, so it hurt, but it was fun to do. 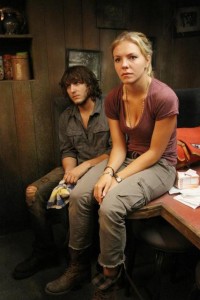 AX: If you were in Lena’s position, would you put looking for a parent ahead of your fear about the supernatural danger around you?

MUMFORD: I would put searching for a parent ahead, yeah. I’m really close with my parents, so that part of Lena I can relate to, that she would go to the end of the world to search for her father. Her mother isn’t in the picture, and so her father is her only family, and she’s pretty fearless regardless, but I think the fact that she would put her life at risk for her dad says a lot.

AX: How does she feel about the other people she’s with on this expedition?

MUMFORD: Well, a lot of them she grew up with, like [Emmet Cole’s wife and son] Tess and Lincoln both, because she grew up on the boat. Lincoln was like a brother, until I think at some point there was a little bit more than that, some sort of spark between the two of them, and so there’s always that fire between them, and then Tess she’s really friendly with – Tess is like a mother to her, and the whole crew, she gets along with them all very well.

AX: And how is working in Hawaii? Is that different than working anywhere else?

MUMFORD: It was incredible. The mythology of Oahu and all the Hawaiian Islands is really strong, so we worked with people who are so connected to their culture and to the Earth – I felt really blessed to be involved with all of that. Also, it’s gorgeous [laughs]. 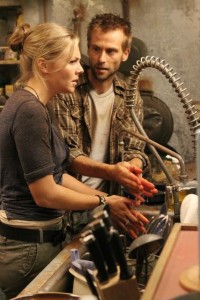 AX: Some of your cast mates were talking about shooting in a location that used to be a real-life asylum. Were you part of that?

MUMFORD: The haunted children’s mental hospital? Oh, my God, I was so scared. I remember the first night I walked in, just the hair on the back of your neck – it had a really creepy feeling, and the whole time I was in there, I was just like, [talking to the ghosts] “I’m friendly!” You could just feel the spirits in there, which sounds like of like heebie-jeebie, but it honestly was pretty terrifying. It’s so incredible when you walk into a creepy place, you really feel the energy of it. It was kind of neat, because there were a lot of native Hawaiians who were on our crew, and they were very in tune with what was going on and they actually gave us like protective things to carry with us and it was very eerie being there.

AX: Was THE RIVER co-creator/executive producer Oren Peli around much?

MUMFORD: He was there when we were shooting the pilot in Puerto Rico and was very hands-on, and then when we went to Hawaii, we were in touch with him over the phone and email. He’s so supportive – it’s just wonderful to have him on board and he’s incredibly involved.

AX: And were you a fan of his PARANORMAL ACTIVITY films?

MUMFORD: I have to tell you, I bought it on iTunes, it’s on my computer and every time I try to watch it, I get so creeped out at the point where it’s speeding through the numbers at night and you know something is going to happen, that every time I turn it off [laughs]. So I haven’t been able to watch it all the way through. And then Katie [Featherston], who was the star of the first PARANORMAL ACTIVITY, played a guest spot on our show, and so when she came on, that night, I went home and I was like, “I’m going to watch it – tonight’s the night I’m going to watch it,” and then I still couldn’t get through it. It’s so creepy. 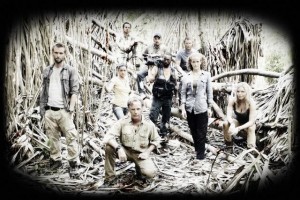 AX: And another movie he produced, INSIDIOUS, is even scarier.

MUMFORD: I know – our whole crew worked on that, our d.p. and everybody. I get freaked out so easily that I just get scared [laughs].

AX: So it’s easier for you to act in horror material than to watch it?

MUMFORD: Yeah, exactly. Although there were enough situations when we were shooting at night in the jungle that it was genuinely scary sometimes.

AX: Do you think you’re going to have a problem watching THE RIVER?

MUMFORD: I don’t think so, just because I know [how it was made] – although I will say in episode two, which I’ve seen now a couple of times, there’s this one moment that every single time genuinely makes me gasp, it’s so creepy.

MUMFORD: I just shot a movie. Actually, the day after I got back [from working on THE RIVER] I started on this film called DRONES [not to be confused with the 2010 feature of the same name directed by Amber Benson and Adam Busch]. It’s a small independent feature film about drone pilots in the U.S. military, which is a really hot topic right now. It’s just me and one other guy and it was directed by Rick Rosenthal. It was so much fun to learn that much about drones. I talked to a lot of people in the military and it was a completely different project, because it was so based in what’s going on in the world right now, so that was really exciting, [playing] a drone pilot. A boxer, too. So I was in boxing training and I dyed my hair to brunet for it. It was a totally different experience, it was really wonderful.

AX: Anything else you would like to say about THE RIVER?

MUMFORD: I just hope everyone tunes in. I think it’s exhilarating and something totally fresh on TV.