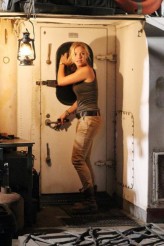 The series tries so hard to have a different scare-of-the-week, but that the formula is starting to get very frustrating 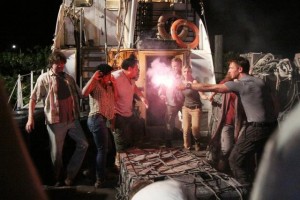 Five episodes in (with only three more to go), it’s still a mystery if THE RIVER is finally going to jump start itself and find a way to satisfy casual viewers as well as fans (I think there are some others of you out there).

It’s a short run, yet the latest episode “Peaches” feels so belabored and unnecessary at times, that it’s starting to get really frustrating to watch.

(Lee Tergesen), a cameraman, who also went missing when Emmet Cole (Bruce Greenwood) disappeared. She’s a little upset that the crew is so obsessed by Cole, while forgetting her father is wrapped up in this mystery as well.

The episode kicks off with the appearance of a ghost ship that rams into the Magus and then disappears. Later, the Magus crew get help from another ship called the Exodus. However, we find out why the crew members are so friendly to them – they need them to get on their ship before sunrise so they can get off the ship.

Apparently, it’s a death ship and it has some kind of curse. Frankly, the mythology of the ship is a bit confusing, but the concept does provide an okay one-off story with a couple of fun scares.

The big pay-off is Lena discovering her father on the ship. She’s thrilled he’s still alive, but by episode’s end, she learns he is indeed dead (he’s on a freakin’ ghost ship) and he’s glad he got to see her one last time.

Unfortunately, the crew of the Magus is no closer to finding Cole than they did last week. However, the strong bonds between Lena and her father is executed superbly with some flashbacks to her as a kid.

Why is this so frustrating – because finding her father, while emotionally satisfying and providing some of the episode its best moments, really has nothing to do with the overall mystery of Emmet.

The drama is very strong in this episode, but the twist about the Exodus is way too contrived (and super confusing when it didn’t really have to be). It also takes half the episode to get to anything truly spooky.

I like many of the character interactions throughout, but the action and suspense really felt like it took forever to finally kick into gear.

Mumford shows off her acting chops here. Even if the episode itself doesn’t deliver 100 percent, she does. She’s one of the most interesting characters so far and this episode delves deep into her life to round things out. Kudos for the show to integrate choice flashbacks every episode. It always feels organic (since it’s under the guise of actual filmed archive footage) and always gives you an interesting look into who these character are, were and perhaps will be.

The other thing is the show’s hesitance to kill off any major characters. This is a horror show and aside from the one death in the pilot, and deaths of secondary non-core cast members, the show has been stingy with any real danger or threat. Kill someone off please. Make it count. Wake this show up, because with three episodes to go, it better pick up the slack quick or a second season is doomed.

THE RIVER is a strange, hybrid show that might have been served better if it were actually airing on cable television, not network TV. It’s a show that definitely delivers on the creepy suspense, but it also tries to have its cake too by feeling like some kind of spook-of-the-week formula. This is definitely not the best episode to date, but honestly, I‘m finding the series to still be engaging and hoping with the three episodes left, there are more answers than questions when that Season 1 finale finally arrives.